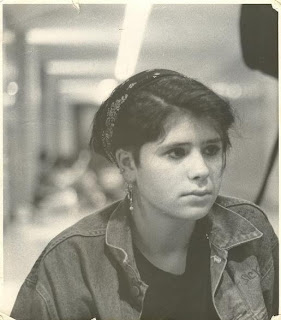 Today's blog entry is a bit of a departure from baby stuff. It's about stuff leading up to baby stuff, so it still sort of counts, I think.

Ever feel like your life had a theme song? Look at this picture of me at thirteen and try to guess what kind of theme song my life had then.

I identified with a lot of song lyrics over the years, particularly ones written by Robert Smith or Morrissey or other masters of uplifting 80s music with lyrics that make you feel that, even though you're miserable and want to off yourself, at least someone else does too and someone with such a nice voice and great hair! That kind of music has totally shaped me. I am an 80s girl through and through. I started taking the subway by myself to school in 1984 listening to my gigantic Walkman with auto-reverse, at home I listened to WLIR (when I held the antenna just so, otherwise it was all static) and even though I was younger than most kids in my grade, I had friends a grade or two or even three above me who wore Sisters of Mercy shirts and combat boots, who dyed and crimped their hair, and who went to CBGB. At night.

As an aside, I was not allowed to go to CBGB at night so, not to be deterred, I went to hardcore matinees instead. I'm not sure why daylight made the Bowery more palatable to my parents, as the crowd at those matinees was far more violent than the crowd at the ska shows my school friends got to go to at night, but nevertheless, I was allowed to go. Thus I developed a taste for angry boy music, big Doc Martens, and a crush on the tall and wiry singer of Sick of it All, who back in 1986 was just one of the kids from Queens like me only with a really deep voice. (He never noticed me.)

Other than going to hardcore matinees, my life basically consisted of buying Cure records with my allowance or babysitting money, scrutinizing the album insert ("Look! In this picture, Robert's hair is parted to the left and crimped, but in that one it's only teased, and in that one..." and analyzing the lyrics. I practiced the words over and over until I'd memorized them, copied them down over and over, filling notebook after notebook. I gave Robert's words all kinds of ridiculous 13-year-old-girl meaning. If the album didn't come with the lyrics printed on the sleeve, that meant making a tape and spending hours playing it one line at a time (play, stop, scribble, rewind, stop, play, scribble again, repeat ad infinitum) to try to figure out what the hell he was singing. I also bought records by New Order, Depeche Mode, Public Image Limited, U2, INXS (first band I saw live, in December 1985 at the Beacon Theater), Joy Division, Book of Love (they opened for Depeche Mode in 1986 and I loved them right away!) the Sisters, Bauhaus, the Clash, the Ramones, Dead Kennedys, etc. I didn't have an older sibling to help me get into music but luckily the fashion among punk and goth kids back then was to write the names of all the bands you liked on the back of your jacket or on your bookbag, so I stared at the cool looking kids in black with big hair at school, on the train, at concerts, in the schoolyard in my neighborhood and made mental notes for the next time I went to Tower Records on Broadway and 4th Street. This led me to awesome bands like the Nephilim and Alien Sex Fiend and less awesome bands like GBH and Black Flag (sorry to any fans, they just weren't my cup of tea). Weird or colorful logos caught my eye. This way I discovered bands I still love today: the Specials, the Cramps, and others. (Note to Johnny: this is how I got into all this underground music and managed never to hear Led Zeppelin or other classic bands until last year. I had no relatives that shared good music with me like yours did and the kids with Led Zeppelin written on their bookbags or jackets were not the ones I wanted to be like!)

And now, fast forward. While my teens and twenties were fun and adventurous, they were also chaotic and sometimes destructive. Turning 30 was the best thing that ever happened to me. It was as if on that day someone handed me a big net and with it I was suddenly able to pull all my crap together. My anchors dropped down and I figured stuff out. Things clicked into place. I finally went fully vegan (after years of eating a vegan diet but hypocritically still wearing wool and leather and not checking for animal testing or hidden ingredients). I moved to Brooklyn. I fell ass-backwards into the most incredible job I could ever have hoped for (one that I hope to keep for the rest of my professional life). I figured out how (and why) to be a better friend, a better daughter. I pulled my finances together, got out of debt and started saving. I didn't think life could be better.

Then another amazing thing happened. You know that "one who got away"? Well, mine came back into my life out of the blue. Johnny and I have had a whirlwind of a relationship since we met in January of 2002 and for a while I had cut him off, was trying to "quit him,"and we weren't really in touch. (Although he would probably tell you that he had cut me off, after all he was the one who got married to someone else while we were on "hiatus.") Even though we were both involved with other people and trying to move on, every few months we would somehow touch base - running into each other accidentally on purpose or finding an excuse to "just check in" - as if to see if the timing or the alignment of the planets or whatever luck of the draw might bring us back together in more harmonious of a way than we had parted. And suddenly, unexpectedly, it worked. The one person in the world I loved and was never able to stop loving no matter what was happening - I got him back. I realize that I lose punk points for being that stupidly happy but I have plenty to spare so I don't mind saying that I felt really and truly like the luckiest person alive.

All this to say that 20 or more years after those hours and hours I spent sitting on my bedroom floor surrounded by Cure records, I am still a sucker for a certain sound and for certain lyrics. I show my husband a contemporary band or song I like and he laughs at me because they all have that sound, that 80s goth guitar or a certain poppy beat or a telltale synth. I like to think I have awesome taste in music, but if nothing else, I am predictable. So when I discovered Shiny Toy Guns a few years ago, I loved a handful of their songs right away. And they have this one called "Turn To Real Life" that made me think of myself. I really have no idea what the song is about and I don't really care, it's just one snippet that makes me grin like an idiot from ear to ear, so ridiculously happy that it "makes me feel like a girl in a fantasy turned to real life." Finally, everything had come together. It look patience and hard work, and, okay, a lot of luck, but it came together in a way I never thought it would. I loved my life the way only a girl on TV would. This kind of thing just didn't happen in real life and I definitely never thought it would happen to me. But it was happening to me. So that became my theme song. I played it all the time, feeling grateful for my life, for my job, my apartment, my parents and friends, my love. How could my life possibly get any better? I really didn't think it could.

Well it could and it did. I got pregnant. And when I did, my taste in music took a nose dive...but I'll write more about that tomorrow.