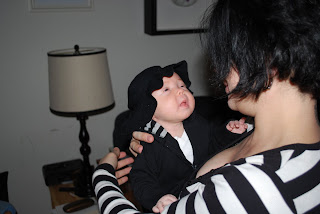 I've already said that getting pregnant was one of the most exciting things that has ever happened to me. Trying can be fun, but it can also be very, well, trying. Anyone who knows me knows that I am super Type-A so I was on it - checking my temperature, recording everything dutifully. This, for those of you who have never done it, is completely crazy-making. Every twinge, every cramp, every little feeling or lack of feeling sends you running to the bathroom, to the books, or worse, to the internet. And I was so sure I was pregnant but it was so early on that tests were useless, even the SUPER A+++ ACCURATE EARLY PREGNANCY TESTS that you can get on some ridiculous website. Yes, I admit, I got one. I got two, actually. I tried one and it said I was not pregnant. Devastated but unconvinced, I vowed I'd make myself wait a week before trying the other. But coincidentally, a few days before my period was due, I'd had an appointment for a physical. I casually mentioned that we'd been TTC (trying to conceive, for those who don't know the lingo). A day later, he called me and left a voicemail saying "Congratulations! You are definitely pregnant!" Wow. Just remembering how I felt standing in my office at 7-something in the evening as I checked my messages before leaving and hearing that message still brings chills to my spine. I called Johnny right away. "Guess what?" My voice was shaking. My hands were shaking. Everything was shaking.

When you're me and you find out you're pregnant for the first time, you are instantly symptomatic. You suddenly feel justified in feeling that every twinge and every rumble and you are also suddenly totally exhausted. At the same time, you are absolutely bursting. People casually pass you in the hall or in the elevator at work and ask how you are and you want to say that you are more tired than you have ever been in your life but you also want to scream OH MY GOD I AM PREGNANT MY LIFE WILL NEVER BE THE SAME HOW CAN YOU STAND THERE AND BE SO NORMAL but somehow you manage a simple "I'm fine, how are you? Nice to see you!" Keeping a secret in like that is the worst kind of torture. You want to take an advertisement out on the front page of The Times. Everyone tells you not to tell anyone just in case though, so you feel like something bad will happen if you tell too many people.

One of my best friends advised me very wisely not to tell anyone that "you can't un-tell." So I made a list of people I would theoretically share sad news with if I had to, and told them. I kept track of who knew and who didn't. At seven weeks, we saw the heartbeat. At ten weeks, we saw the lentil-shape squirming around, and our midwife assured us that we were already out of the dangerous stage, but we held on for a few more weeks before I just couldn't keep it in another second.

Keeping it a secret was made more challenging by the fact that I was symptomatic. I was completely exhausted. I am normally a very energetic person, so feeling like I'd been run over by a truck was very hard to hide. Plus I had some awful morning sickness (and by morning I mean all day long). I solved that problem by throwing up on the street between cars or in my office with the door closed, but I couldn't exactly lie down on the sidewalk or under my desk and nap, much as I may have wanted to.

Johnny had never seen me like this. He, like most new fathers-to-be, felt a combination of left out and mighty glad he wasn't the one experiencing all this. He tried the best he could to help: he fetched any weird foods I craved at any time of the day or night, he distracted me with one Sopranos episode after another, he stood dutifully behind me with both hands on my bottom and pushed me up subway stairs, and best of all, he sang to me.

Every time I sighed, moaned, yawned, gagged or complained in any other way, he started singing the Rocky theme song. He'd throw a fist into the air. "Dun-da-da-dun-da-da-DUN-da-da-dun. Dun-da-da-dun-da-da-DUN-da-da-dun." Or Eye of the Tiger: "DUN! Dun-dun-dun! Dun-dun-dun, dun-dun-DUNNNN!" He'd make a Billy Idol snarl and wave his fist in the air. It always made me laugh. I thought of Rocky, overcoming every challenge ever, including a very low IQ and an incredible inability to complete a sentence, to become a champion. I could do it too! Johnny sang tirelessly every time he saw me flagging, which in the first trimester was all the time.

I downloaded those two songs but over the course of the second trimester, I forgot about them since I felt so good. I was busy telling people, buying maternity clothes, finding out she was a healthy and happy girl, feeling her move, thinking of a name. All this with bursts of energy, getting lots of work done, going to the gym every few days, going to prenatal yoga, taking three classes in business school. I didn't need the Rocky theme song. I was Rocky!

In the third trimester I started slowing down again. I was really tired. REALLY tired. And when you're that big, your body hates you so you also cannot sleep, no matter how tired you are. No one takes this seriously. You complain and they say "Ha ha! Just wait until the baby comes. Then you REALLY won't sleep. This is just practice!" and you hate everyone who says that (which is everyone you know) because they cannot possibly understand how tired you are right now. So the Rocky theme song was reintroduced and Johnny started pushing my bottom - bigger now - up the subway steps again. Together they worked better than caffeine.

But my morning sickness was replaced by a new kind of sickness: sentimentality. In the last two months or so of my pregnancy, everything made me cry. Things that were supposed to be silly made me think of how much I loved my daughter and how much I couldn't wait to hold her in my arms and - I couldn't help it - I'd be in tears. We went to see the Broadway play Rock of Ages. It definitely won't be a spoiler if I give you the basic storyline since the entire play was based on the lyrics to the Journey song Don't Stop Believin' with a girl from some small town and a boy from Detroit coming together in LA: Rock'n'roll boy meets rock'n'roll girl in a crappy club. They date, they break up, they come back together. (Sound familiar?) All while bad 80s rock is playing: Journey, Def Leppard, all that - you know, the stuff you love to hate, if you're my age. You know every word but you don't want to admit it. Of course I thought of us the whole way through, although I have to admit, Johnny and I did have a better soundtrack to our relationship, at least up until that moment. The play ends with rock'n'roll boy getting rock'n'roll girl pregnant and they get married and have rock'n'roll baby. It was supposed to be funny and cheesy, but I sobbed stupidly the whole time thinking of my wonderful husband and my gigantic belly. Then we watched Rocky 3. Or wait, was it 4? Or maybe 2. We watched the one where after the fight, Rocky calls out to his wife, "Yo, Adrian... I just wanna say... I did it!" and I cried again, thinking of the moment Thora would finally be born and that I might say something similar (though possibly more articulate). I cried listening to songs that used to make me think of Johnny... they now made me think of Thora too. We watched Saturday Night Fever and then spent hours downloading horrible Bee Gees tracks and laughing while doing the horrible dances and the John Travolta tough guy walk in the apartment. We watched Grease, and then sang You're the One That I Want to my belly for days.

We made a 2009 compilation on New Year's Eve, half made up of all these terrible songs we suddenly loved and half Michael Jackson, because if you weren't already a Michael Jackson fan in 2009 you definitely became one after he died. That summer it was impossible to avoid Michael Jackson blasting on the radio, from car stereos, from our computer speakers. Our aging dog's tentative walk reminded us of the Billie Jean video so we danced on the floor in the round over and over. We danced around the apartment like Snoopy to Linus and Lucy - the Peanuts theme song. To corny AC/DC songs, Johnny played air guitar and I played drums on my belly. We watched The Muppet Movie for the millionth time and danced around the house to Movin' Right Along, half laughing and half crying because we'd loved the Muppets as children and soon we'd be able to share them with Thora.

The theme song sentimentality has continued. What weird switch flips automatically when you become a parent and makes you love these stupid songs so much? I never would have guessed it would happen to us. After a friend gave me a lullaby Cure record which made me smile and sob hysterically, we downloaded twenty more of these Rockabye Baby albums - lullaby versions of bands like the Ramones (awesome) and Nine Inch Nails (definitely not awesome) and AC/DC, Radiohead, Nirvana, Bjork, Green Day and more. Yes, I admit, the lullaby version of Teenage Lobotomy made me cry. When Thora was first born, she was such a strong presence that Johnny ran around singing the Godzilla theme song to her. (It's actually kind of cute, once you get past the initial menacing sound of trumpeting horns and clashing cymbals). As she got bigger and crankier and learned to make that bright red, scrunched up face that makes us both pout back at her and say "Oh NO! No tomatoes!" he sang the theme song to Attack of the Killer Tomatoes. Johnny sings a silly song to Thora as he changes her ("I'm naked, woo hoo! Yeah naked, so what?") which turned out to be a real song I didn't know. I sing One Was Thora to her over and over every day and Alligators All Around from Really Rosie, which I still remember from when I was seven and we put that play on at camp and I had to sing that song in front of the whole camp while I wore green shorts and a green cap with a propeller on my head.

But best of all, from the day she was born, Johnny has been singing made up lyrics to the Maya the Bee theme song, singing of course Thora... Thora the Bee! Only familiar with die Biene Maja (the original German), I had never seen this cartoon version before so I didn't know the song. I thought he'd made it up himself, and when I finally heard it of course this made me cry too, because in my mind, like everything else in my life, it's all about our little girl.