Back to Work: Thora and Her Daddy Spend the Day Together

This is a day I definitely do not want to forget.

Today I went back to work. It was only for a couple of hours and it's not like I haven't been working part-time all along from home, but today I went to the office and sat down at my desk and logged in for the first time since the end of January. This was incredible for so many reasons. One, it was my first time getting to the office since moving. When we lived in Brooklyn, I had a commute that took an average of an hour and a half each way and involved at least two trains and a lot of walking. Today I rode my bike. It was the first time I'd gotten on my bike since I got pregnant and it was the first time I tried the route, so I was very slow, but even moving slowly I got there in 25 minutes. Amazing. Even when I am back in the office full-time I will have two new hours a day that I can devote to my daughter and husband and not to fighting with the MTA. And the $89 a month I will save on not needing a metrocard can go to buying more crap like this: 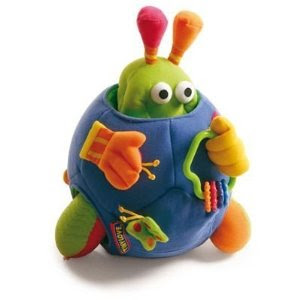 I know, I know. Plastic crap. But it's not that bad, right? I couldn't resist it because it matches the mobile on her stroller that she smiles at and reaches for, and although I find it terrifying that its head vibrates and its crotch beeps when you tap it, Thora loves this silly thing already.

Anyway, as I sat down at my desk I was afraid I'd forgotten my passwords and how to use a mouse but my fingers remembered and soon I was clicking away and happy to be in my little corner getting things done. Also it was so nice to see my coworkers! And then I had to be on the west side at 1 so I rode across the park and later rode home. The weather was beautiful and my leg muscles, who protested at first, were singing happily, thankful that I'd decided to use them finally!

And where, you are surely asking, was Thora during all this? She was home with her daddy!

Johnny, now armed with his Angel Pack and the ability to make bottles, took care of his baby girl for the first time on his day off from school. For five hours! I was so nervous to leave her but every time I checked in (which was a couple of times, okay a LOT of times) he was doing fine and she was doing fine and the house was not on fire and no one was starving or screaming. When I came home there were two empty bottles and Thora was in different clothes than I'd left her in. Everyone was happy and the smile that Thora gave me when she saw me was the one of the very best things I have ever experienced in my life so far.

We then had lunch together, went for a walk in the beautiful spring afternoon while Thora napped in the mei tai (it was my turn to carry her) and then came home. She and I were both asleep by 7:00. Big day for everyone! Thora stayed asleep but I got up to marvel at her while she slept and then to get some work done.

Just as I was thinking about writing a short blog entry about what a great day it was today, Johnny told me shyly that he took some pictures of Thora while I was out. I took a peek and decided I had to preserve this in cyberspace. What a great daddy she has... even if he's somewhat color-blind. :-) 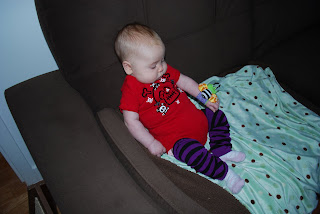 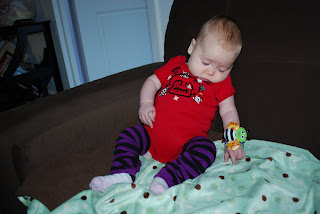