The past weekend, which was a three day weekend, was incredibly challenging when it were supposed to be relaxing. We decided not to go away for the 4th of July and instead stay home, relax and spend time in the city. Oh well.

The first thing happened was the weather. It's been above 95 each day which makes Thora cranky, me crankier and Johnny the absolute crankiest. Wearing a baby in this weather means having another person stuck to you, which is actually preferable to schlepping the stroller and all its accessories around, but it really isn't preferable to staying home with the air conditioner blasting and no clothes on. So mostly we stayed home with the air conditioner blasting and no clothes on (well, Thora did that last part, anyway). But we also left the house every day anyway because I have a rule about leaving the house every day, and because Thora has gone on a sleep strike, so we thought maybe wearing her for a few hours would encourage her to nap. It didn't.

Friday night, after a Day of No Naps, she just refused to fall asleep. Poor kid. She'd drift off and then lift her fingers to her face and stiffen and bam! Awake again. Over and over. We gave up trying to get her to sleep in the co-sleeper and just put her in the bed. She woke up again when we went to bed an hour or so later. And she cried. She was so awake for so long that I in my delirium thought she might like to sleep in her crib which she has never slept in before, never napped in, never even played in. I parked her in it with a toy (big no no!) that sounds not a little like wind chimes. She happily touched all the chimes, giggling to herself, while I shooed Johnny back to bed, thinking sleepily "I got this" and got out a blanket and pillow and set myself up to sleep on the floor next to her crib. I figured, even if she's playing, she's not crying. But as soon as I was settled on the floor thinking that I was way too old to be sleeping on the floor but so tired I was drifting off anyway, she started to cry. So I did what I always do when she cries at night - I brought her to bed with me. But my bed was a blanket folded in half on the floor and if I was not comfortable sleeping on the floor, Thora was even less comfortable. It was a major, major mess and no one got any sleep and by morning we were both cranky and truly hating life.

Thankfully she napped well on Saturday. So well in fact that she was falling asleep all day. At one point she was nursing and dozing and we decided to take advantage of the situation and clip her dreadful scissorhand nails. Johnny did it this time while I held her, and he was cunning and precise with the first six nails. On the seventh, he cut her. "I got her!" he cried in shock. "AAAAAAAAaaggggggggh!" Thora cried, also in shock and now wide awake. And then she bled. This was a nasty little cut into the nail bed which was not serious enough for anything other than applying pressure with a cold washcloth but serious enough that neither of us will ever clip her nails ever ever again. Now I'm filing them, or just biting them if I have to! "Should we take her to the emergency room?" Johnny asked over and over. He was so overwrought that it was tougher for me to take care of him than it was to take care of Thora. I say all this not to single him out but to applaud him a) for having the balls to even try and b) for loving his daughter so darn much. It comes out in everything he says and does, and exudes from literally every pore. I have never seen anyone in such distress at the thought of accidentally hurting someone they love. Thora was fine but her daddy was really aching. Seeing him so stressed and vulnerable over something relatively tiny really made my heart just swell with love for him.

Luckily we had two things to distract us from the Great Nail Clipping Disaster of 2010. One was that Johnny got me to play Mario Galaxy on the Wii, which was so awful it was hilarious. Against my no-TV for the baby rule, Thora watched, completely spellbound. She barely blinked, she was so into watching the colors and hearing the silly music. She loved it. Me, I wasn't so sure. I hadn't played a home video game since Atari in the late 70s (maybe 1980?) at my friend Heather's house. Johnny did his best to coach me through the worlds to get the stars. It wasn't that easy. As I wrote on Facebook, My wrists hurt. And my heart is still pounding, not so much from the stress of the game, but from the stress of Johnny screaming, 'No, NO!! Don't go that way! Kill that spike thing. Aimee, I said KILL it, not run into it! Whatever you do, definitely DON'T jump off the side and die. Oh, wait..' Jeez. I need a drink.

The other thing was that Thora cut her first tooth. I can't see it yet (mostly because she flat out refuses to let me look in there) but I can feel it. It's tiny and razor sharp on the bottom right. Teething has brought about some weird behavior in our kid other than just the rivers of drool. Normally a ridiculously happy baby, she whimpers sometimes, and becomes wildly moody and clingy in one minute, freaking out when one of us walks away from her, and then totally normal the next. She naps for 2 or more hours at a time one day and barely at all the next. She pulls at her ear and chews on fabric. She cries before latching on to nurse. Really this behavior could be the result of anything at all, and truthfully, she's still pretty darn happy, but it's so easy to say knowingly, "Oh, she's teething..." and people nod at me understandingly. It's the world's greatest excuse for everything!

We did get lots of cute pictures and videos this weekend though, as there were lots of smiles between the whimpers. Thora is almost five months now. Check her out! 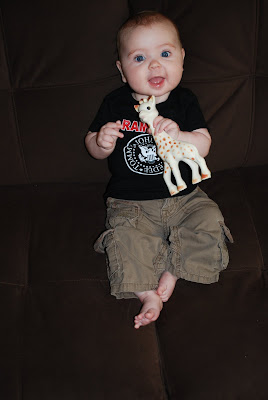 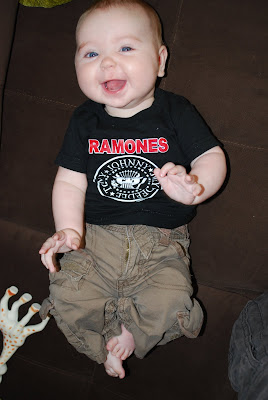