Who are you and what have you done with our baby?

The last few weeks have flown by. It's like someone put Johnny, me and a tiny baby into a mixer and when we came out ten seconds later we came out with an entirely different child. This one has two teeth! A pincer grip!  It has hair! It crawls! It climbs up my legs! It pulls itself to standing in its crib! It babbles and sings. And worst of all... this one doesn't sleep. Cute as she is, I barely recognize this child.

Just look how adorable she is, daytime: 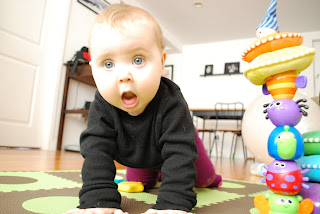 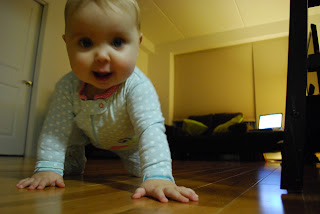 When she crawls like that or when I catch a glimpse of her second tooth, her growing hair, her ability to feed herself small pieces of butternut squash, or her attempts to say "ma-ma" (that I am probably imagining) I can't help but ask her who on earth she is. What happened to my little baby bee? I am starting to see what she will look like, what kind of personality she has. But then at night when I am totally done and she is wound up I find myself saying the same exact thing but meaning something entirely different: Who are you, wild child? And what did you do with my baby, who used to be such a good sleeper?!

I have been reading that around 8 months of age many babies go through a sleep regression. I know it's normal and I can see why. She definitely has a ton of stuff going on. She wakes up bouncing up and down, climbing all over us, pulling my hair, wriggling into tiny spaces, calling and yelling and smacking herself in the mouth (a teething thing, I believe). But even though I know it's all normal it really does seem like an awful lot at once. Last Thursday she got up on her knees for the first time, after weeks of pulling herself around by her arms, and she advanced two paces. A day later she was crawling like a pro. And by Wednesday - yesterday - she was pulling herself up to a stand in her crib. When did this all happen? I can't even get used to one thing before another happens.

So, the sleep thing. I get it, I do. Life is exciting to her! But still. It's horrible. I managed to go without getting a cold the entire time I was pregnant and the whole time she was a newborn and little tiny baby. That was a whole lotta sleep deprivation right there. I am the kind of person to wake up with a sore throat on day two of not enough sleep, with a full blown cold by the end of day three. But shortly after Thora was born I started to get smug, starting to think I was immune to colds no matter how little sleep I got. I was doing fine! Hopping out of bed at baby's first rustle, smiling when nursing at 3 am. And then I got even more smug, because Thora was sleeping so well. I was getting up once, maybe twice a night. Remember? Not long ago she went from sleeping with us in the bed to sleeping in the co-sleeper in our room, then to the co-sleeper in her room, and then right into her crib. All over a period of about three or four weeks. But. Then the first tooth made its appearance. That was the beginning of the end. And now here we are with our baby, who went down with little to no complaint at 7 pm, wide awake every night until 10, singing at the top of her lungs, hopping up and down in the wrap, kicking out of the glider, standing in the crib like it's a prison. Not surprisingly, I got my first cold. That was two weeks ago. Now I have my second cold.

She's exhausted, clearly. But she can't stop moving or talking. This is the first time in her tiny life that she's pushing herself to get the most out of every waking moment. She tires herself into meltdowns but until she reaches that point she cannot be slowed or stopped, even though I know it is coming and try to head it off at the pass. She kicks while she nurses, she pulls at her own hair or mine when I hold her, lying in bed with me she instantly wriggles out of our comfortable snuggle and up onto her hands and knees in the dark until she bonks right into the wall or the guard rail. In my sleep I feel like a broken piece of a Tokyo building as Godzilla pushes me out of the way, knocks me down, or uses my neck or shoulder or head as a stepping stone to something very exciting like the hanging plant or a bookshelf or a poor unsuspecting cat. It really doesn't help that my deep cough, lingering for weeks and far worse at night, wakes Thora up when her mental activity doesn't. That truly sucks.

So what to do? The kid smiles through it all. She's happy! She laughs at everything. Even a sudden crash or tumble elicits only a tiny pout before she gets determinedly up and tries again with a big toothy grin or one of the giggles we live and breathe for. She babbles when she's awake at night, making us laugh and take videos like this one:

So perhaps she really is getting enough sleep after all? Maybe she just needs less all of a sudden? (A lot less?!) But I don't believe it. So in an effort to prevent anarchy, I try hard to stick to our routines, having read that a baby needs to be taught that 2 am is not party time. So every night after dinner and bath I sit her down to nurse her and rock her to sleep. I use my nighttime voice. I make Johnny turn off the music. We are calm, we are quiet. She goes down eventually - and in the crib no less - but stays asleep 20 minutes before she is once again awake and standing at the crib, waiting impatiently, making me feel guilty. Eventually I cave and take her to bed with us. But even that doesn't work on the first try these days. Tonight I lay my coughing self down with her at 8 pm thinking if I fall asleep, she will surely fall asleep too. No dice. Should we just let her stay up instead? I am tempted but then I fear that she will never ever sleep again and that when she is an adult, lying in some sleep institute taking part in a study on insomnia, it will be revealed that I let her stay up until all hours when she was an infant.  Not to mention the fact that I like my evenings with my husband, with my computer, with my kitchen, catching up on extra work, or reading a book. So we compromise. Johnny bounces her. I wear her on my back. 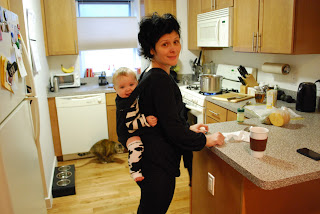 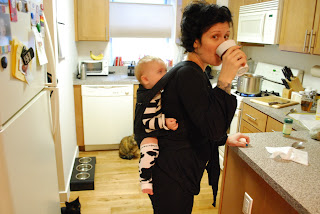 We hold her. All while we start evening activities: the dishes, straightening up, a movie, tea, video games, logging into work. Eventually, the signals become too great to miss. All at once, she's done. We rush to lay her down and she passes out suddenly, like she did tonight, going from 60 to zero with one big thunk. But this is often at 10:15!

And she's up again at 7 with me, getting ready for work again: 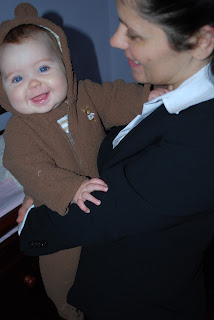 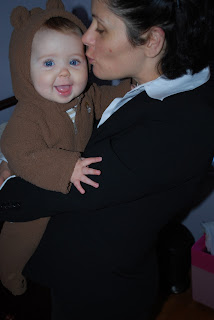 She does nap well. And to be fair, if I didn't have to get up for work I often think she'd sleep later. She's getting at least ten, maybe eleven hours of sleep for every 24. But still, I remember that I went to bed at 7:30 until I was in middle school. I still need far more sleep than I ever get. Am I setting this kid up for a lifetime of sleep deprivation? Or is this a phase that will pass? Will we be able to return to old routines or perhaps I should just create new ones? 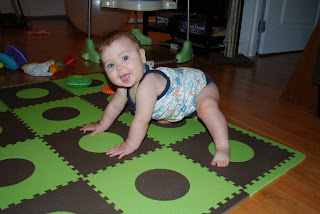