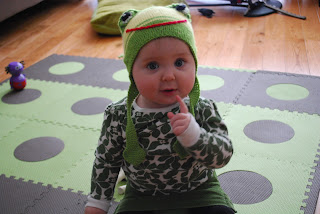 I have always been the kind of person who benefits from structure. I like routines, lists, habits, traditions, rituals. Even as a teenager I had a big Filofax, stuffed with all kinds of lists and calendars. As such, I am generally a pretty organized person but it's only because I do the same things every day. I admit to having an absolutely terrible memory. I have to write everything down or it's gone like I've never even heard it. If I don't write things down in the same place all the time, even things I do every single day will totally fall off my radar and I'll walk around feeling like I've forgotten something but I won't have any idea what it is.

When I was little, I used to make myself to-do lists that always started with "#1. Finish this list." Dorky, I know, but even as a very young person, I was into getting things done. It felt like an accomplishment to have something to cross off the list right away. But my lists were pretty short then; I never really had that much to do. I would invent things. It was like I tried to give myself OCD the way I worked to invent routines. The way I cleaned my room every day was by throwing every single thing that was out of place into a giant pile in the middle of my floor. Then I'd methodically chip away at the pile, imposing order on my chaos until everything was relatively clean and straightened, talking myself through it like a game show host talking to a contestant. When my mother asked me to pick up around the house I would employ essentially the same tactics as I did in my room but I couldn't find a method to my mother's disorganized madness so she would come home to a mountain of stuff I piled high on her bed, not knowing what else to do with it. That was not a popular game, so while this is not unlike how I do housework even to this day, back then I attempted other routines and habits instead. On Monday nights I stayed up late to watch the Muppets and Little House. On Fridays after school I went to the library. For a while on Tuesdays I had ballet classes and some other weekday afternoon I had ice skating, but those didn't last. Neither did Little League, as I made a lousy shortstop and always got redirected to the outfield. Then I tried my hand at holiday traditions, only, I didn't have any to follow.

I wanted us to do things as a family. I wanted to feel like an important part of something and to look forward to things. I read books like All of a Kind Family and romanticized doing fun chores like those girls did (looking for hidden pennies or buttons as I dusted, for example) or preparing for Shabbat on Fridays or scouring the house for every last speck of leaven before Passover. I took this all very seriously but had little success convincing my parents that they wanted to convert to Orthodoxy. We were Jewish, but not that Jewish. I didn't have to wear only skirts, go to Hebrew school, keep kosher, speak English peppered with Yiddish phrases. But I wanted to. When I realized we were nothing more than garden variety reform Jews, my fickle heart was ready to abandon our religion completely. I hoped that perhaps we could instead be like our upstairs neighbors who were Catholic. They had four kids with a wide range of ages, so their apartment was always vibrant and alive with activity, voices, food, and fun that I could hear echoing through the walls and the ceiling of our apartment, which felt empty and dull in comparison. They picked out a huge tree every year for Christmas. I loved and envied the excitement in their apartment as the holidays drew closer. I was allowed to visit when they decorated, envying their tradition of opening stowed-away boxes of ornaments, tinsel and lights. Each kid had their own signature ornament and their own stocking. And they went to Midnight Mass! I didn't have a clue what that meant but it sounded exciting and I wanted in. Sitting in our apartment downstairs, I could hear their buzzer as their guests arrived, the thumping of kids' feet as they ran up and down the hallway, their excited squeals as they opened piles of presents. It was silent in our apartment. We weren't the Hanukkah bush type of Jews. We weren't even the Chinese food and movie theater kinds of Jews. For me Christmas was just a long and boring day.

But I had lots of other ideas too. I thought maybe we could make a holiday out of the date I was adopted, since no one I actually knew was there for my birth. That didn't work. Then I tried to get us to copy other families who say "every year we do this" or "on this day we always do that." My parents didn't bite. The only thing we did with regularity was summer camp, which I hated and dreaded. Perhaps we saw routines and traditions differently. But in my mind we just never did make a big deal out of any holiday or time of year at all.

This isn't all bad. In this country, tradition seems to mostly mean "spend lots of money we don't really have on a bunch of crap no one wants or needs." I am very grateful to my parents for the way they discouraged needless consumerism. I had a brief love affair with overspending when I first left the nest but then realized that the unbridled use of plastic would catch up to me. During this time I went holiday crazy, spending money I didn't have on gifts for friends (and myself of course), on dinners and other celebratory efforts. You can only say "Soon I'll be making more money so I'll pay it off later" for so many years before you realize that if you ignore your bills you get 29% interest and late fees that really pile up and you need to make a change and start budgeting. So my parents had this right all along, but I had to figure this out for myself.

Now I am so happy to have the best of both worlds. From the time we met, Johnny was all about establishing family traditions. He has some really great ideas for ways to have fun and he always provides the very best soundtrack. And I have inherited a healthy dose of my parents' frugality. This makes our efforts both creative and financially reasonable. We've found that we don't have to spend a lot of money to have fun. We just like hanging out, traveling, exploring, having new adventures together, as a family. 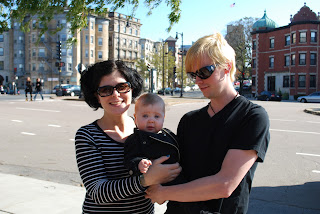 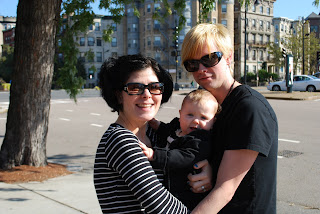 Over the past couple years we have started peppering our lives with celebratory treats and special occasions. Last year we started a family-centric Halloween with pumpkin carving (here are this year's pumpkins, one for each of us): 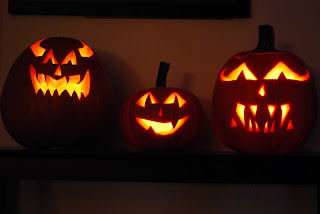 and Tim Burton movies that we did again this year. It was even more fun with an adorable baby to make a costume for (even though I, the least crafty person ever, have just set myself up for a lifetime tradition of making a costume for her). 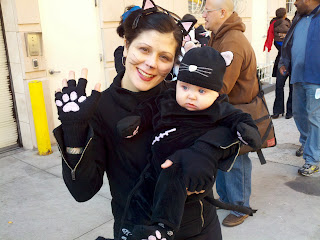 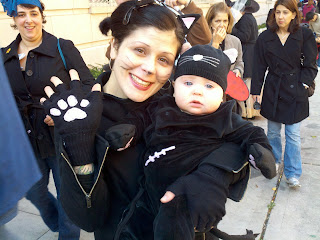 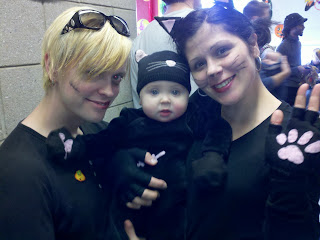 Also, for many years now I've held a vegan Thanksgiving for and with my friends and as we've become a family we have continued this. We adopt a turkey at Farm Sanctuary and we cook and bake for days. We spend Christmas Eve at home drinking hot chocolate and playing cheesy Christmas music. We spend Christmas Day with Johnny's family. On New Year's Eve we make a compilation of our most favorite music of the year and we dance around the apartment together and kiss at the stroke of midnight. On my birthday we reenact the time we met (which was the day after my birthday) by dancing like dorks to Come On Eileen, which is what was playing at the club when we first talked. Johnny's birthday is always right around Memorial Day so we celebrate with a long weekend. Mother's Day and Father's Day are now special days for the three of us and for two years in a row now have involved indulging in a trip to Candle 79. We like to celebrate. We have good reason to. So now, this is just what we do.

We also go away together a few times a year. Summer vacations, winter too. Every time we go away we fantasize about the future: the trips we'll take the kid(s?), having a summer house that we'll one day grow old in, the vegetable garden we'll grow and the kind of car we'll have when we retire. Who knows if any of those things will ever happen but it is becoming a tradition to imagine ourselves living wherever we go and play make believe. 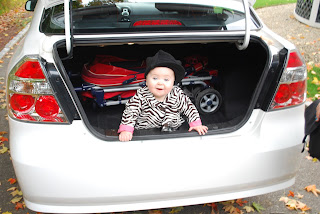 My favorite time of year is the fall. I love fall, mostly because I hate summer. Around September of every year I start longing for it. Here in New York City it feels like fall lasts for ten minutes and I always feel cheated out of the most perfect season. I miss the crisp air and the beautiful changing foliage, especially in New England, and the way autumn smells of apples and cinnamon. This year we took what I hope will be an annual pilgrimage to my old stomping grounds in the Boston area in mid-October. We gave Thora red and orange leaves to play with and took her pumpkin picking and apple picking. I think I loved it more than she did. Knowing that it's something we might do as a yearly tradition makes me love it all the more.  And the pictures are so good! 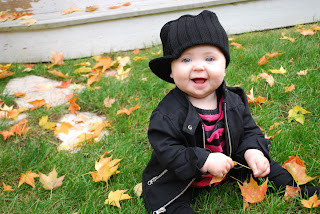 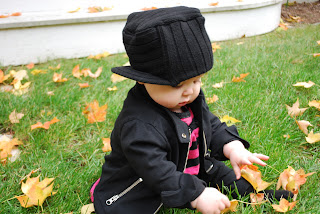 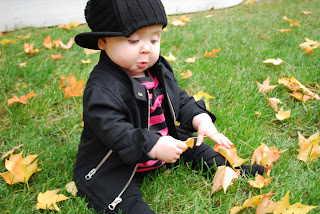 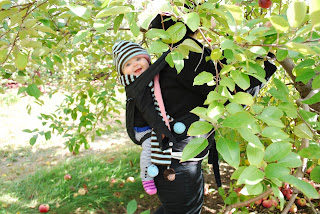 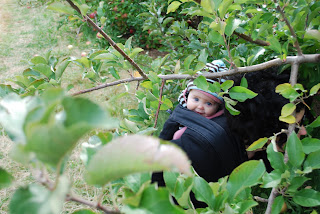 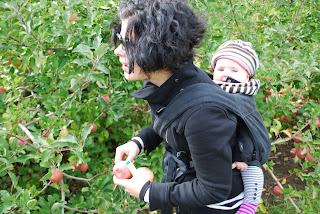 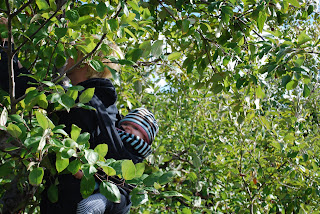 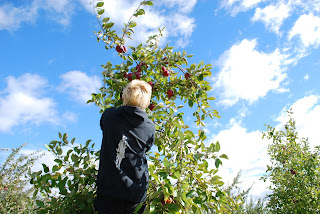 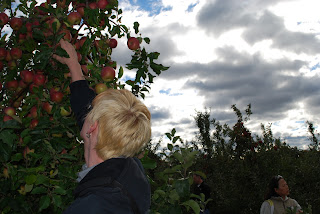 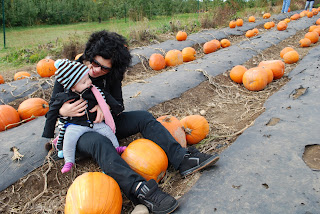 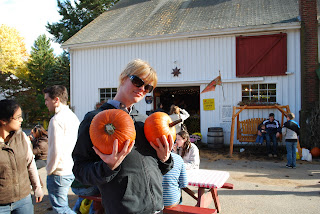 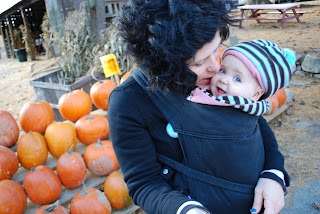