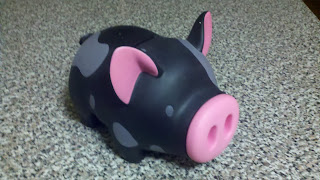 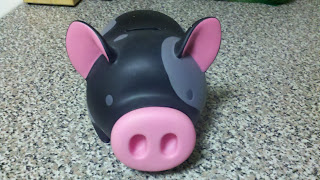 A couple blogs back I wrote all about my financial woes from years ago. This was a very hard entry for me to post since I feel like talking openly about money and personal finance is very taboo. But I would like to be a part of changing that. In order to have and make money, you have to learn how to earn and keep money. There's no shame in letting people know that this was very hard for me. My parents are extremely frugal and very financially conservative. Yet, I didn't learn by watching them. I had to learn by screwing up royally, and I think many other people are like me in that way. I think we just expect things will sort themselves out later when we're grown up and making more money, and we don't have to worry now.

Well, now I'm grown up and now I worry. We have been debt-free for years but as I get older and take on responsibility not just for myself but for a family of soon-to-be-four, being debt-free isn't enough. In the past I would dutifully put 10% into savings, and halfway through a pay period I would transfer it all right back to checking. Now my allocation for savings goes right into an ING account from my direct deposit, and I never even see it unless I'm getting ready to spend it on something we've been planning for. In the past I let my dad choose my 401k allocation, do my taxes, tell me where to put money and when. I never thought about it. I just worried about feeding myself from one paycheck to the next. But when Thora was born, it was time for me to learn all that stuff. To practice, I opened her 529, set up recurring payments and researched the allocation myself. A year later I went through it all with my dad, who really should have been an accountant or an investment banker, and he made no changes. I was so proud of myself! (Baby steps, I know.)

I ask a lot of questions. Then I write everything down. If I don't write down everything I learn, I forget it all instantly. I need to revisit my notes frequently before I start to absorb stuff. So when I got excited about finance, I asked questions. And I kept notes. And some of the most valuable things I've learned about saving money, I have learned from my friends and family. Most recently, in response to that blog entry I wrote about how I have a hard time keeping my food budget in the black, a handful of people wrote with some recommendations and ideas on how to spend less, especially on food. Most of them said I *had* to try Trader Joe's. I hadn't been to one in about ten years, but I checked out the one nearest our apartment. And they were right, it is SO MUCH cheaper than Whole Foods. I am hooked. Thank you, friends.

So friends, here are some little things that work for us. I learned a lot of this from listening to Dave Ramsey and going through his Financial Peace University. I hope something here helps you the way you all have helped me.

1) Do not only a budget but an allocated spending plan for each pay period. I have a monthly budget but it's not possible to just divide expenses down the middle for each pay period, since in one pay period I pay the mortgage and in another, the maintenance. In one I pay utilities, in the other, the food. And so on. So I generally have more in one pay period to work with than the other. Also if I'm short, I remove stuff that's in the budget like clothing or subscriptions, taking it out of one allocated spending plan. And I don't feel deprived because I have the option of putting it back two weeks later. Anyone can wait two weeks for something, right?

2) Give yourself blow money. Every week, Johnny and I get an allowance. We do not ask each other what we spend it on. If he wants to spend his entire allowance on paperclips or beer and I want to spend mine on bubblegum or on a pair of shoes, that is our business and that is that. Most often we treat each other to Starbucks or to lunch. Now that I am pregnant again I buy snacks and second lunches. Johnny buys me flowers (aww). I buy Thora books. Johnny buys video games. I get my nails done. That is free and clear money that we are not allowed to feel guilty about. When I first started doing our budgets, we'd sometimes come up short and I'd say "No blow money this week." It's one thing to say, let's have PBJs or rice and beans tonight, honey, because remember that awesome dinner at Candle 79 we treated ourselves to the other night? But when you don't have cash in hand at all, you feel deprived. And that's when you throw up your hands at the prospect of eating PBJs or rice and beans because you're broke and life sucks so you say "oh, let's just order sushi in" and use the credit cards and spend twice as much as you would have if you'd had just a little bit of blow money to do something nice for yourself within your budget. Or if you don't have $3.50 cash to buy a bagel sandwich from the deli, you end up charging $15 worth of stuff at Zabar's or Eli's with a credit card to meet the minimum and not look like a loser for not having $3.50 in your wallet. It's always cheaper to use some cash.

3) Have an annual blow allowance. We initiated that this year. This allows each of us to make a completely unbudgeted purchase if we want to, up to a certain dollar amount. For Johnny, this is music software or equipment or a new PSP or 3-DS. For me this might be an expensive purse, jewelry, I don't know what. Maybe a new Tumi suitcase. Maybe a clothes shopping spree once Newbie is born and I can wear a size 6 again. Or maybe I'll just let it sit in savings. Neither of us have touched it yet, but it's there for when there's something we really want. Just talking about what we might spend it on makes us feel like we have so many choices and yet need so little, which makes it that much easier to save carefully the rest of the time.

4) Unsubscribe from all those Groupon-y emails. They are time wasters, inbox clutterers, and spending tempters. I have purchased a half-dozen Groupons to facials or other services, vegan restaurants or bowling alleys that I have not made the time to use before they expired. If there's something really stellar (like the $10 for $20 at Amazon.com a few months back), enough people repost it on Facebook that it reaches me anyway. The only email offers I still get are Gap coupon and sale emails because I like to get Thora's clothes there and when they have 40% off Wednesdays I feel like a total loser for paying full price on Thursday. But now I never buy anything there at full price!

5) Realize that the thrill is in the hunt. Once you buy stuff, the thrill is gone. I sometimes browse in stores and things just pile up in my hands without me even thinking about it. Then while I'm on line, nine times out of ten I snap myself out of my daze, put it all down and walk out. An hour later I can't even remember what I was about to blow all that money on! When shopping online, we let stuff sit in our Amazon cart. If you are anything like us, you don't have time to shop at stores for most things. We see things we like when we're out and about and look them up later on Amazon. We stick stuff in the cart to think about it, and when enough things have been there long enough that we get free shipping, we either know we still want the thing because we're still talking about it, or we've totally forgotten about it so we can delete it.

6) Do food shopping according to a meal plan. I pick a few dinners and a brunch and think about work lunches and make a list of ingredients and buy only those things. Going without a list for specific meals makes me spend far more and then I come home with a bunch of stuff I end up throwing together for "stir fry surprise" and other less than spectacular meals. And then listen to my friends who tell you to shop at Trader Joe's instead of Whole Foods and get ready for your financial world to be rocked!

7) Acknowledge once and for all that credit cards are useless. They are not even a good emergency plan because that means the smallest problem feels like a huge crisis. Debt as a backup plan will land you back in debt. If you have an emergency fund, it's amazing how what would have otherwise been an emergency is suddenly not a big deal.

8) Read The Millionaire Next Door. It's a fascinating study about people who build their own wealth and how they spend it. Most of these self-made millionaires drive basic used cars, have never spent thousands or even hundreds on a suit, a watch or shoes, and don't feel like they have to out-fashion or out-spend their peers. I loved this book. After reading it I felt smug watching flashy people on the streets of New York City, telling myself I bet she went into debt to buy those sunglasses and that makes me feel much better about wearing and using the things I have instead of constantly wanting to upgrade to new clothes, new shoes, new toys that I don't need to keep up with the Joneses. The Joneses are probably in debt like everyone else!

9) Never, ever borrow money from friends or family and never lend money to friends or family. If you need it, ask for it outright, and if you can spare it, just give it. Gifts are gifts but loans can and do destroy relationships.

10) Don't stop charitable giving or gift giving if you can. When we built charitable giving and gifts back into our budget, we felt richer than ever before. It's a wonderful feeling to be able to donate to causes that are close to your heart and to share and celebrate with others.
Posted by Teeny and the Bee at 10:52 PM