Recently, Johnny and I got iPhones and we love them. We had been talking about getting them for ages. I have a Blackberry that my job gave me and I had always used it as my personal phone too until last year a policy was established which said that we were not supposed to use work phones for personal calls or texts anymore. So when Johnny upgraded his phone, I got one for myself too. The iPhone wasn't yet available on Verizon so we chose Droids. And almost instantly, I regretted it. Mine froze all the time and was just generally inferior to the iPhone. Why hadn't we just waited the extra month or so until Verizon released the iPhone? We asked Verizon about upgrades and they basically laughed at us and said we would never ever qualify for an upgrade to an iPhone, ever. We worked out the insane math: it would actually be cheaper for us to cancel our plan with Verizon (and pay all the cancellation fees) and get a new plan just to get the new contract price than it would be for us to keep our plan and just buy iPhones. Outrageous! But also stupid and a total hassle to change numbers. So after a year or so, we finally stopped complaining about not having iPhones and broke down and just bought the 4S when it was released.

My guilty conscience wants to confess right away that I recently had my worst parenting moment ever. It was totally my iPhone's fault. Not mine! (Yeah, right.)

I love my iPhone. I am rarely without it. I use it for everything and wonder seriously how I managed so long without it. I take a million more pictures and videos than I ever did before, and I send them to everyone I think can tolerate looking at 8457394865 pictures of my kids every day, and love love love iMessage and all the awesome apps and things to press and play with. It's the best toy I have ever owned. I really, really love this thing. Really.

So there I was, walking from Harlem down to the Upper West Side with both babies in late November. I was wearing Freyja. Thora had refused to sit in the stroller, so we were both walking slowly. She walked through the raked up leaves, picking up leaves and sticks here and there. She was running, singing, pushing the stroller, calling to me, waving at strangers, and being generally adorable like so: 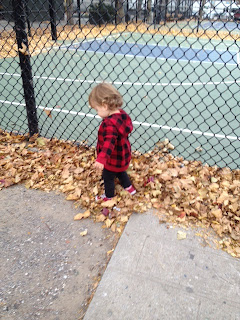 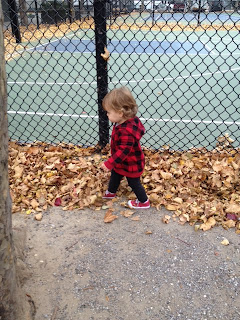 So I snapped pictures and shot video as I walked, sending them to Johnny who was at the salon having his hair done. I was sure Thora was next to me helping me push the stroller but I got so absorbed in sending these adorable pictures that all of a sudden I heard, "Ma'am? Excuse me, ma'am?"

I turned around and there was an older gentleman pointing at my child, lying face down on the sidewalk about 20 feet behind me. She had tripped and fallen and was waiting for me to help her up. She wasn't hurt or even shaken, she was just surprised that I hadn't noticed. I was horrified and ashamed of myself. I had no choice but to admit to myself that I was not paying attention even a little. I thanked the man as politely as I could and hoped that he wasn't judging me (but I was sure that he was. I would have judged me!). Bad mama. I ran to my girl and helped her up. I kissed her knees and palms and put my phone in my pocket and we kept walking. And I held her hand the rest of the way and didn't touch my phone again. You don't need to tell me how awful that incident could have been. I got off easy and I know it.

The other scary thing about this toy is that Thora knows how to use it as well as I do. She knew so many people with iPhones who let her play with them before we got ours that she practically taught us how to use ours. She can slide to unlock. She knows my four digit passcode (seriously!!). She knows that pictures of the baby can be found by touching the flower and that fun things happen when she presses the little bald baby, the flashlight and the ladybug. She wants something exciting to happen when she touches the orange but it's a banking app that looks a lot more exciting than it is. She refuses to let me do anything with that phone while she's around. If I touch it and she sees, she'll be in my face and in my lap with what feels like 20 arms and hands grabbing at it, going "Have it? Have it?" Half the time I give in to her but I really shouldn't. Three times now she has somehow disabled it and set it to emergency call. Did you know that when an iPhone is disabled and locked to emergency, it turns red and says "Emergency call" in a whole bunch of languages? I hope you never find out. The panic that sets in as you try to figure out how to undo whatever your toddler did to break your overpriced toy is really just terrible.

Obviously, something had to change. We set rules. When we're walking, we are walking. Walking and paying attention to where everyone is and that's it. Also, Johnny and I don't want our kids raised by Apple or by Netflix. So the dining room table is now technology-free when there is more than one person sitting at it. Meals are phoneless. The time between when I come home from work and when Thora goes to bed is also technology-free. Should she wake up at some ungodly hour before dawn, a video is allowed but come 7 am, the TV goes off and we start our day.

And to take it all a step further, we established job charts. Not just for us but for Thora too! This keeps us honest (no more "But I always do the dishes! You never fold the laundry! I'm always the one who..." and so on) and it keeps us on top of what needs to be done. It's also meant to establish some routines for Thora, partly so that we remember to stick her on the potty for five minutes twice a day and partly so that she and Freyja grow up knowing that everyone will be expected to pitch in to keep the house somewhat orderly. 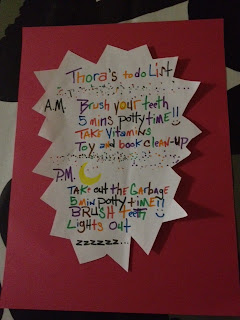 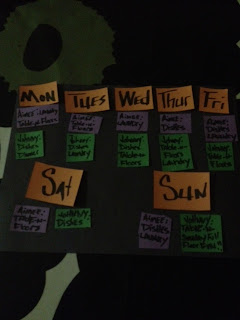 This is working out really well for us. I'm starting to think Thora orchestrated it all by disabling my phone on purpose, so I'm appointing her IT person of this household to keep us all in check.