Adventures with Coxsackie, or Help! My Kid is Like a Pit Bull!


I work for a national animal welfare organization. What I do is pretty administrative at this point: I'm in an office, sitting in a lot of meetings. I don't get to be out and about with the animals as much as I used to, or as much as I would like. Recently I moved offices from the building that houses our adoptions center and hospital to another that is in midtown and entirely administrative. I love where I work and I love what I do, but sometimes I miss having a dog or cat in my office, being able to take part in a behavior class, or sharing the elevator with dogs, cats, potential adopters, volunteers, medical folks. The activity in our midtown office is very different and much more corporate.

Some dogs, especially pit bulls, have a lot of energy and need a ton of exercise. I learned this the hard way. At one point years ago, I met an absolutely gorgeous blue nosed pit bull who was ten months old and had been owned by a very famous rapper before he surrendered her to our organization. I loved her from the moment I saw her and considered adopting her, so I brought her home for the weekend to see how she might get along in my household. I called her Winnie. This cutie isn't her, but they look a lot alike. 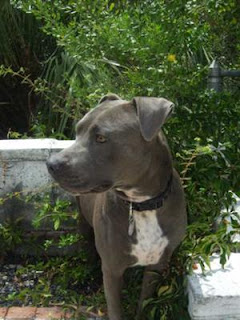 Winnie slept curled up with me and was so cute and affectionate I could barely stand it. She had lots of love to give and she won my heart fast. But she had so. much. energy. I was used to taking my dog - an ancient shepherd-husky mix - for a fifteen minute constitutional twice a day at most, during which time he mostly sniffed at bushes and dawdled while he made up his mind where to poop. This dog needed a lot more exercise than that, but I didn't know it. So while I was out, she ate my garbage and scratched up my floor. While I was home, she ate a friend's cell phone, started a fight with my parrot, and got into absolutely everything. In the space of two days she had done more damage to my apartment and my stuff than a lifetime of other companion animals ever had. My dog Henry, about ten years old at the time and well into his twilight, just looked on and rolled his eyes, as if he was saying, "Really? You want *this* to live here?!" Monday morning, I brought her back and that was that. She was adopted in no time and while I loved her and felt a twinge when I saw her go, I wasn't sorry that she went to someone other than me. She was sweet and loving, but I knew I couldn't handle her.

After this experience, I shared an office with someone who really, really loved pit bulls. Before he adopted his own, he would volunteer to run with some of the shelter pits. He would take them, one at a time, to the park and just run, really wearing himself out, even more than he wore the dog out. It hadn't occurred to me that Winnie might have been just fine at home had I taken her for a jog or done anything with her to engage her beyond a little playful volleying with a tennis ball and some treats. Being that my dog was already ancient when I'd adopted him and he was the only dog I'd ever had, I couldn't have known this from first-hand experience.

Well, now I have a two-and-a-half year old daughter and she reminds me a lot of Winnie. If we don't give her something constructive to do, we're asking for trouble later on. Like young dogs, little kids need to be kept busy and tired out. Since Bee's birth we have had a family rule that we have to leave the house at least once a day, no matter what. At first that rule was for us, so we could get used to having a normal life with a child, running errands with a child, going food shopping with a child. Just getting out of the house with a new baby can take forever. With two it's even harder - someone is always eating or napping or in need of a diaper change. Teeny is almost 10 months old and it still takes me forever to get out of the house with them. I still remember the first time I took both Bee and Teeny outside, alone. I was unshowered, still in my pajamas, feeling completely outnumbered by my children. All we did was take a walk to the playground and the supermarket, yet I felt like we were taking a trip to the moon. But it helped me find the courage to go a little further and try a little more, and soon we were seasoned and fearless commuters, travelers and explorers.

It turns out, though, that this rule of leaving the house every day benefits Bee more than it does us. We try to find something fun and engaging to do, so that even if it's a day of errands we stop at a playground or go visit the turtles in the Harlem Meer or see the koi in the community park a few blocks over. For a two year old, though, a walk around the block is fun and engaging. She picks up rocks, hugs trees, says hi to people, swings on scaffolding, stares at bugs, and so on. But it's not that easy to wear her out, and if we don't succeed, it invariably means that she will ride her trike in circles around the living room yelling "I'm spinning in circles, Mama!" or come tearing out of the bathroom after her bath, naked and wet, slamming into me and yelling at the top of her lungs, "Hi Mama! I'm a crazy horse!" And you know these types of wild and crazy don't-throw-the-ball-in-the-house-Bee moments always end in tears. Better to make a concerted effort, and to do this outside. We all sleep better at night.


After last week's adventures to Sesame Place, the hippo park and a farmed animal sanctuary's family event, she came down with a horrible fever. She was grouchy and wakeful and spat her medicine all over me, and worse, she refused food. A trip to the pediatrician confirmed what we suspected: Coxsackie. It's contagious and it's something you really don't want, so we felt it was best to keep her home, or close to home, while she was symptomatic. For four days, the most we did with her was water the flowers in our outside planter. Parks, playgrounds, errands, everything else was off limits. We were up most of the night with her so we were too tired to do anything but drag ourselves out back to the planter with her and her Kettler trike, and she was so tantrumy from the Coxsackie that these were short visits anyway; interrupted by a fall resulting in a scraped knee and a tantrum or a moody exclamation of "No! I don't want to water the flowers anymore!" Poor tired and crabby kid: we barely recognized her.

But it could be worse. I was home unexpectedly for the better part of a week, during which time Teeny cut her first tooth and mastered the army crawl, or more accurately, the belly wiggle. She feeds herself entire handfuls of homemade banana muffin in a manner not unlike a teenage boy. And I got to see it all! 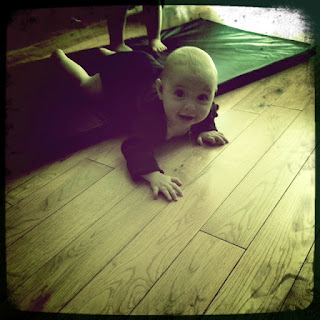 A friend who is a preschool teacher reminded me that yes, coxsackie sucks, but it beats lice! She's right. I'm grateful. Five days in and she's at about 80% recovery. Her fever is gone, her appetite is back. Thank the gods she's eating again. She still has the rash and the sores are open, not entirely healed. She's still waking up a zillion times a night and is up for the day at 4 am, and then napping at off hours because she can't keep her eyes open. But the worst part for us was the five days of pent up energy. Five days of  Richard Scarry, Gossie and Gertie, Pixar movies, Thomas the Tank Engine, iPad apps, and trying to do outside things inside. She was bored. The first day, I painted her fingernails and toenails blue. She covered herself with Hello Kitty stickers the next day. Another day, she dragged out all her stuffed animals and toys and lined them all up on display. Eventually, she started beating up on her sister. 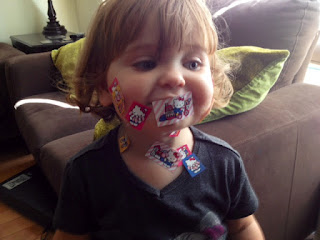 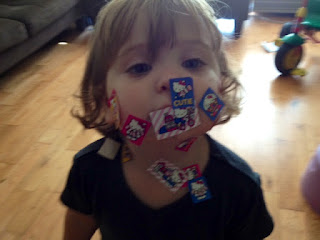 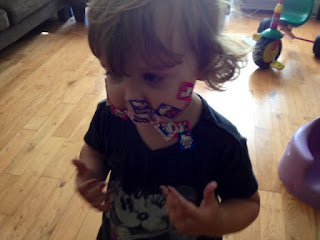 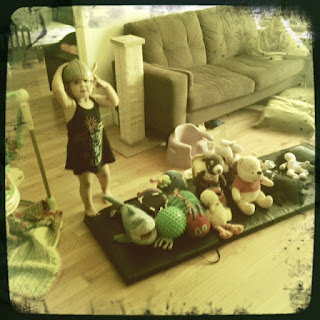 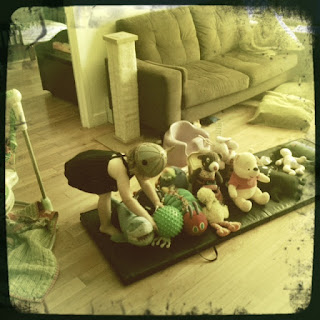 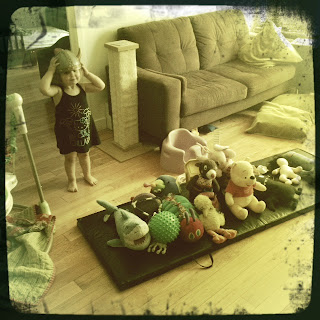 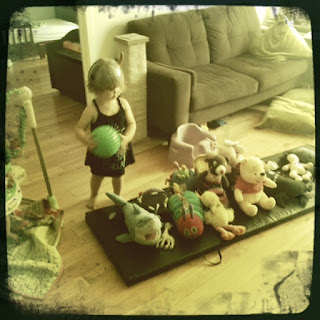 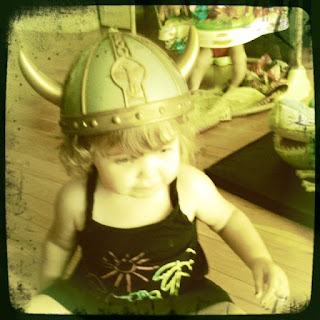 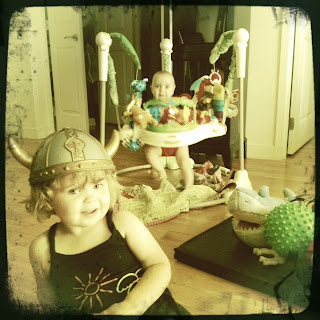 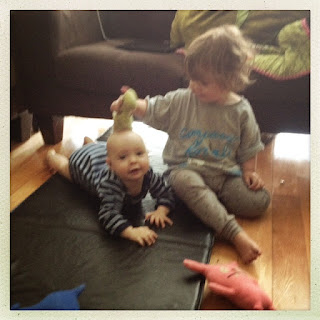 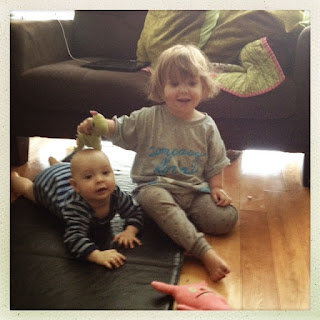 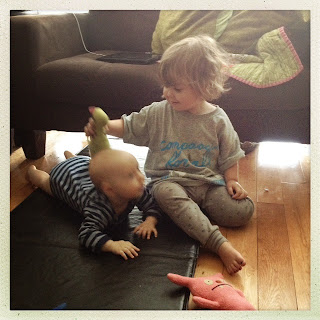 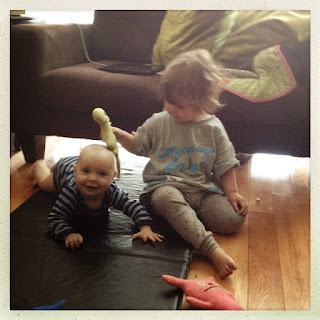 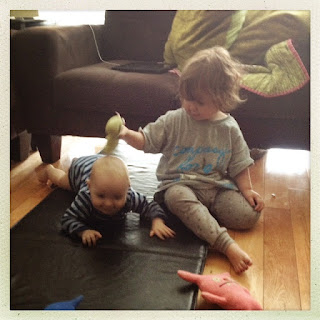 She heard us say the same things over and over this week so much that she now sounds like a parrot belonging to a cranky old person. "Only roll it," she now says every single time she picks up a ball in the house. "No bikes in the kitchen," she reminds me as she pedals into me while I'm cooking. By day four, she was climbing the walls. She showed me her boo boos a million times, reveled in getting to have ice pops, soy milk and lollipops to her heart's delight, and having mama there all day every day to cling to, sit on, cry on, jump all over, yell at, boss around, you name it. But she was ready to get back to her regular life of activity, and so were we. Fingers crossed that she starts sleeping well again, which would give us the rest we need to keep up with her!