Right after I wrote that last blog post about Teeny's delayed milestones, I went into full-on panic mode. I barely slept for the next few nights, tossing and turning and fretting about my baby. But I also went into full-on action mode. The outpouring of love and support that came from so many of you inspired me. A lot of you have been there and know -- in one way or another -- something of what I'm going through. Thank you all.

So I got busy. I made a zillion phone calls. I talked to aquatic therapists, people who do pediatric Feldenkrais (though I'm still not really sure exactly what that is), EI specialists near and far, physical therapists, orthopedists, you name it. I googled, I called, I left messages. I made a list of all the calls I made with the dates and their info, just in case I had to start harassing people for calls back. But everyone called back right away. I was so overwhelmed.

And slowly, a plan came together.

Not for the first time, my high school connection saved my ass. My friends, my colleagues, my family, all of you who reached out with your stories, your suggestions, your well wishes: I am so grateful to you. And to my classmates: I really freakin' love you people.

It started with my lovely high school friend M, who does pediatric physical therapy. Thanks to modern technology, the fact that she lives in San Diego didn't slow us down a bit. I poured my heart out to her one late night via Facebook IM, and she asked me one question after the next to try to get at the root of the problem. She generously offered to do a Skype or Face Time session with Teeny and me to see for herself what was going on. Two days later we did that, and she gave us some suggestions for exercises we could do until Teeny's in-person evaluations. In the meantime, I was trying to track down the right person at the EI agency everyone kept referring me to but I was landing at one person's voicemail after the next. I decided to make an appointment with a private physical therapist recommended by my pediatrician until I could figure the state stuff out, and I'm glad I did.

As soon as I got that appointment squared away, another high school friend reached out and let me know she actually works with the agency I'd been trying so hard to reach. She put me directly in touch with the magician there who pulled some fast ones to help Teeny evade the three month wait list. Her evaluation is scheduled for September 25. (Thank you, A!!)

Her private physical therapy evaluation was last Wednesday morning. The therapist put her on her belly on a cute rainbow colored mat and talked to us as he pulled on her pelvis, pushed here, poked there. And Teeny was such a good sport! She tried so hard to reach the toys he spread out for her. She cooed happily when he placed her on the ball and on the peanut to try different movements. He stressed that she needed to learn how to push off from one side and demonstrated her core weakness by leaning her to one side... and letting her flop right over. Johnny practiced and I chased Teeny and then I practiced while Johnny chased Teeny. By the time the session was over, Teeny was frustrated and in tears. I was somewhat reassured, Johnny was saying "I want to buy that rainbow floor mat" and Teeny had kicked three exercise balls across the room, rearranged all the stools, thrown a six pound medicine ball in my lap, and licked and left fingerprint smudges all over two mirrors. While I filled out papers and made appointments (twice a week for the next month), she and Johnny jumped on the trampoline. This place was better than Gymboree!

Two seconds after we put Teeny back in the wrap, she was fast asleep. What a workout! We got strict orders to keep her on the floor as much as we can when we are home, no matter how much she hates it. (And hate it she does.) But we are diligent and on the bright side, she's so exhausted from it all that she's napping and sleeping better than ever.


So we will do our own private PT until the EI evaluation, and if she qualifies at that point then she will receive additional -- and free -- care until the age of three, and if not, then that is even better in my mind. The magician explained that she had to demonstrate a delay of a year or more, which seemed weird to me because her appointment is the day after her first birthday and she is clearly far more advanced than a newborn, but she explained that they sort of "pro-rate" the delay and that it would make sense to me as we got closer.

The physical therapist pronounced this a "minor issue" -- as if any issue with one's child could ever be minor -- and predicted that she would be crawling by the end of the month. For a second I was thinking that would be the end of that. "So you don't think she'll qualify, then?" I asked, in my mind already seeing her pulling herself up, standing, walking. "No," he said, bringing me right back down to reality with a crash. "I do think she will qualify actually. Crawling is just the first step." He pointed out the many strange things she does, like shaking both her hands at the same time, the way her legs are usually locked together, the way her one arm gets caught under her when she tries to roll over. All of these things, he said, are signs of a weak core. He explained why she falls on her face when she gets up on all fours and rocks back and forth. He explained why she can't yet take off, why it's useless to try to stand her up or focus on sitting. He also said that these problems show up very often, in his experience, in smaller babies. This to me was forgiveness. Of course I will never know why Teeny is so very much smaller than her sister, but at least I know this could likely be related to her size and not to, say, something I did wrong. He was also quick to note that she is very alert and verbal, and that in his opinion this was strictly a physical issue. This too reassured me.

So we have a plan. Teeny starts school this week. I will take her there, three days a week. Many of those days, Johnny will take Teeny to her appointments. And at home, we're all doing our part. The Bumbo is in the trash, the Jumperoo is for sale cheap (anyone want it?) and we ordered the rainbow mat. We have a basket of hand toys in the living room and Teeny is an expert at fishing out different ones to entertain her sister while she gets extended tummy time. This kid is on her belly ALL. DAY. LONG. She's trying so hard and has made a ton of progress from when the video and photos below were taken. Already she's starting to separate her legs when she wiggles and kicks. This makes for easier diaper changing too! Already she is leaning forward in the high chair to grab the Cheerios I leave for her, a little further away each time. Already she can sit better in the bathtub. Already she is reaching with one hand instead of two, and trying to lean on one arm to push herself up. She's a good student and a tough cookie, just like her mama. 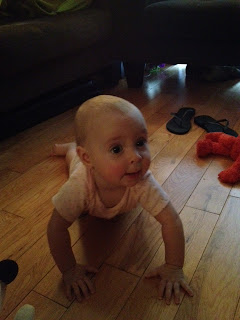 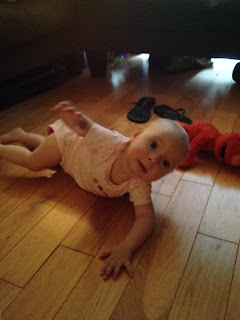 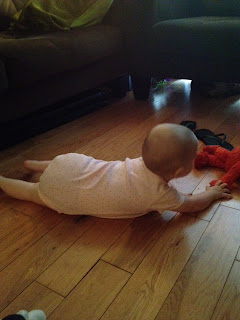 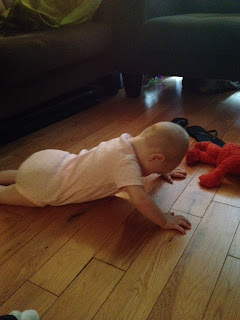 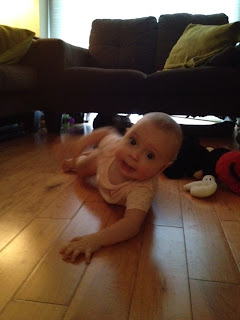 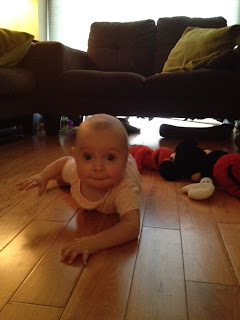 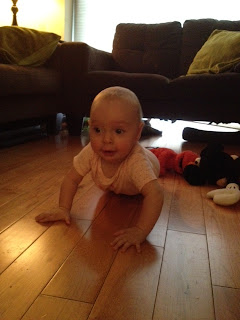 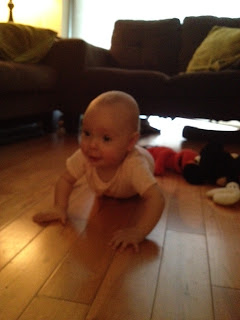