50 things I Love About Teeny


Last week was the New York City marathon. We live right on the course towards the end, so every year we watch as much of it as we can. This year was the first year Teeny could actually watch with us and follow along. It was a really cold morning, so we bundled up to head out early. As we waited for the elites, Teeny sat in her wheelchair and clapped for the para-athletes soaring by in wheelchairs of all shapes and sizes. Because it was so early in the day and it was very, very windy, we were among the few out there watching. There was no music, no party, no masses of people dancing and screaming and holding signs like there would be in another hour or two. It was an oddly melancholy moment. I felt a little like we were in a Giorgio DeChirico painting, standing there alone on the eerily empty, cold and windy corner of a street set up for a much bigger crowd. Most of the runners wouldn't see this particular intersection for another two hours or more, yet the para-athletes were zooming along one at a time, accompanied by some of the fastest cyclists I've ever seen. I stood next to Teeny, pointing out the different kinds of wheelchairs as they passed us. I explained to her what they were doing. We cheered and clapped and I wondered vaguely if any of them noticed her. I cried as I watched her watch them -- I couldn't help it. At mile 21, many of them looked very tired but they all had that determined look I know so well. It's the expression I see on Teeny's face every single day. 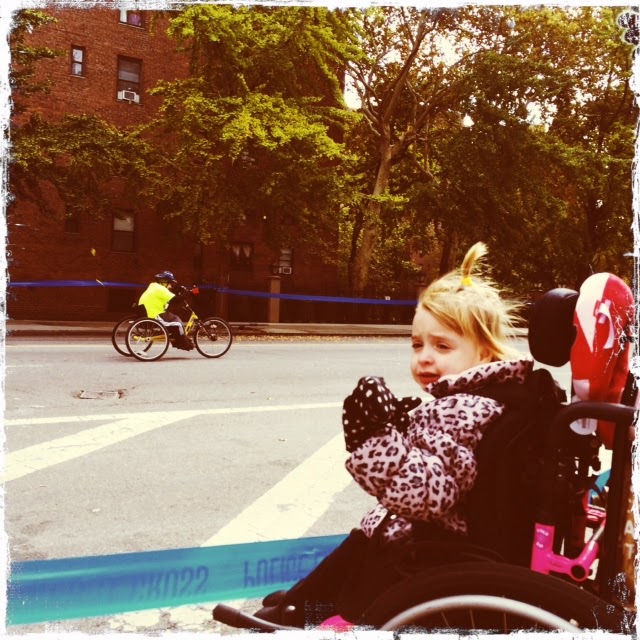 Maybe Teeny will grow up to be a para-athlete like the ones we saw that day and maybe she won't. Maybe she will get a PhD or maybe a GED or maybe she will be happy well into adulthood just singing her ABCs. Whatever the case, a good friend said today that she will definitely surprise us. And it's true. She already has.

The day we got her MRI report I thought my life was over. Two years almost to the day, I now know it's not about me. It's all about her. And my life is far from over. It's so much better, and that's so much because of her.

So since internet lists are all the rage lately, here are 50 things I love about Teeny today:
50. She loves the soundtrack to The Nightmare Before Christmas, which has been one of my favorites since the movie was in the theaters ages ago.
49. How she says "MORE AH-WEEN! MORE JACK! I want JACK!" when it's over. (She seems to speak in all caps quite often.)
48. She wiggles her butt when she's dancing.
47. The pure joy she finds in so many things in life.
46. She is able to use language to do more than express a need or a want. For example, when you call her name, she often answers with a deadpan "what," like a totally typical teenager.
45. Putting her on and taking her off the school bus is a family affair we all have come to love. 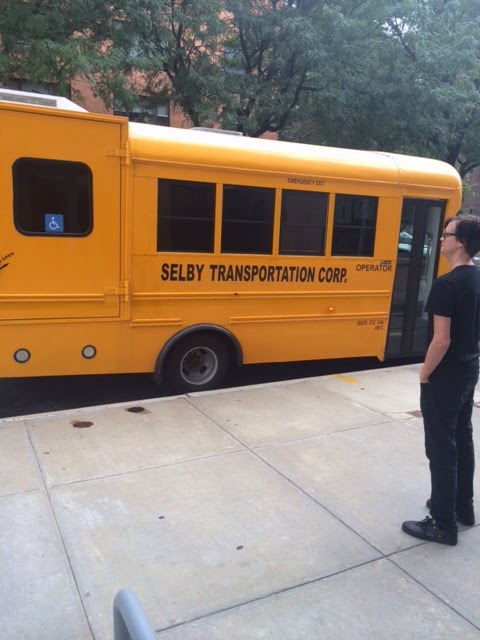 44. How she sings the ABCs and counts on her fingers to ten.
43. Her adorable little lisp.
42. She gives high-fives.
41. The way she has decided to call Johnny "dada" even though we all call him Daddy.
40. Her big round butt that is the only physical feature of mine she seems to have inherited and how adorable it looks in her new Hello Kitty or My Little Pony underwear.
39. She doesn't mind long car rides.
38. How she claps and shouts "I PEED!" when she uses the potty.
37. She uses the potty about 75% of the time now. We thought we might be changing diapers forever.
36. Listening to her repeat everything anyone says to her and knowing she's trying her hardest to understand and contribute.
35. Her big beautiful eyes. 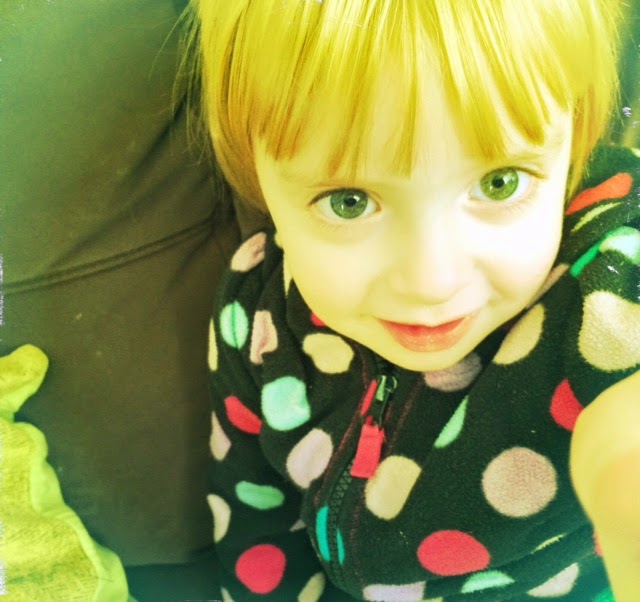 34. Snuggling with her, breathing her in and having her ask me for more hugs and kisses, most of which she now plants squarely and very wetly right on my lips.
33. Her determination. I've never seen anything like it.
32. She's a fairly adventurous eater and will try almost anything at least once.
31. She hugs her baby dolls and makes them sleep, cry, eat and walk.
30. Her funny pronunciation of everything.
29. The way she says "I love you... too!"
28. She brushes her own teeth.

27. How she always wants to do everything by herself.
26. Except when she doesn't. "No. Mama do it!"
25. She has a crazy sweet tooth, especially for vegan chocolate chips, chocolate chip cookies from Whole Foods and any cupcakes I make. 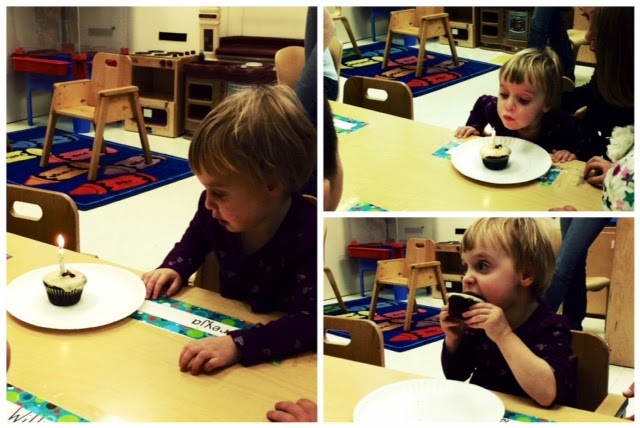 24. How she refers to herself almost always in the third person.
23. She says "Easy, Mama!" and "Be nice!" when I get cranky.
22. She loves her adaptive ballet class and begs to wear her ballet shoes all the time. 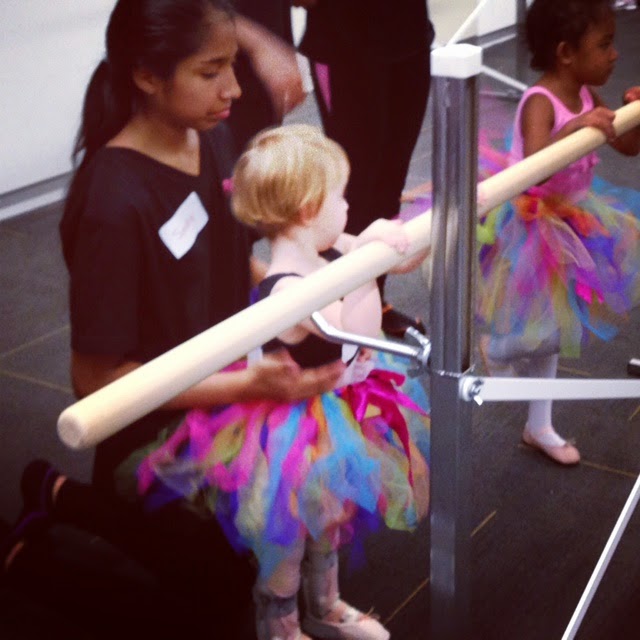 21. How she turns the pages of books when we read to her.
20. Her little index finger, always pointing at something.
19. The way she sleeps, rolled in a ball, butt in the air.
18. Kissing her soft skin all over.
17. Watching her learn.
16. She's becoming very girly and often insists on wearing my necklace or bracelet.
15. How she says her own name.
14. She plays her dada's guitar. 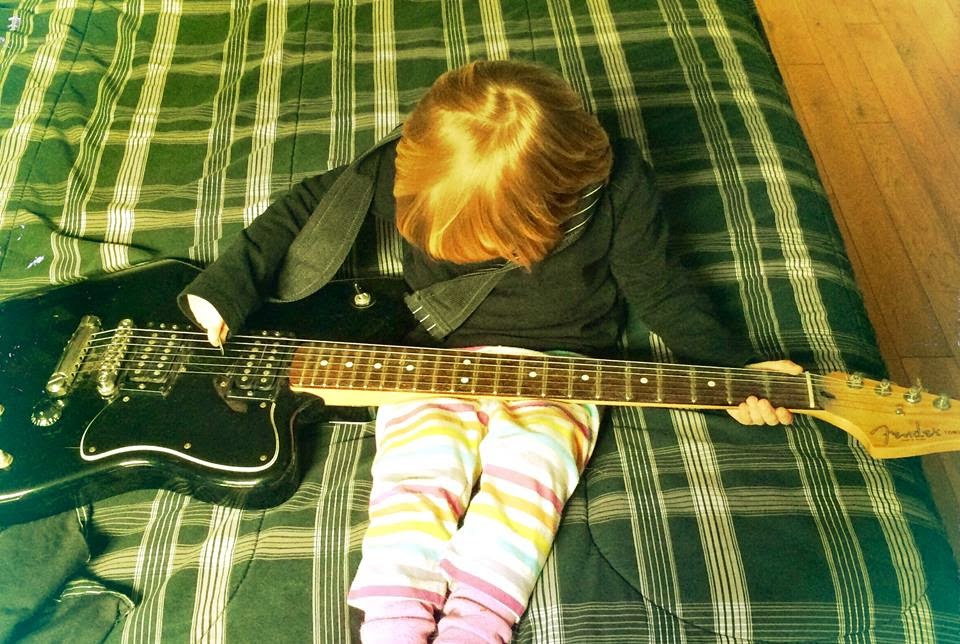 13. She says hello and goodbye in such earnest that you know she's genuinely happy to see you come and sad to see you go.
12. She likes to wear costumes and play dress-up. 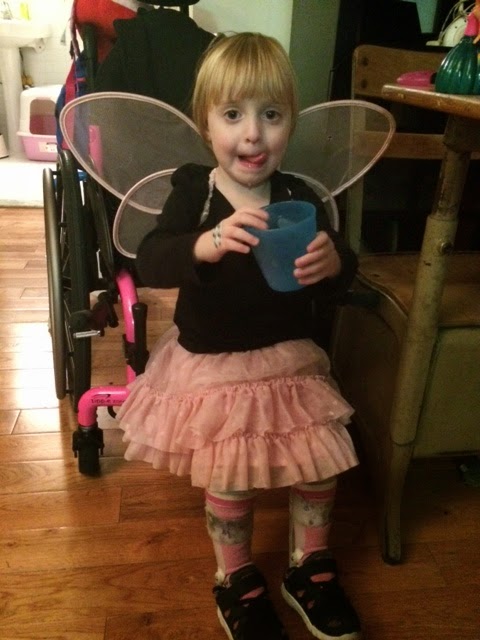 11. How much she charms everyone who meets her.
10. Kisses, band-aids and the little icepack shaped like a ladybug make every boo-boo better. And how she says "I'm okay!" whenever she tumbles because she knows we all worry she's going to get really hurt. 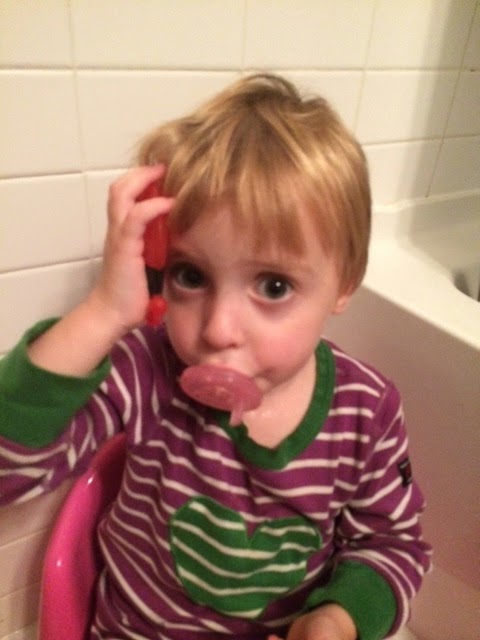 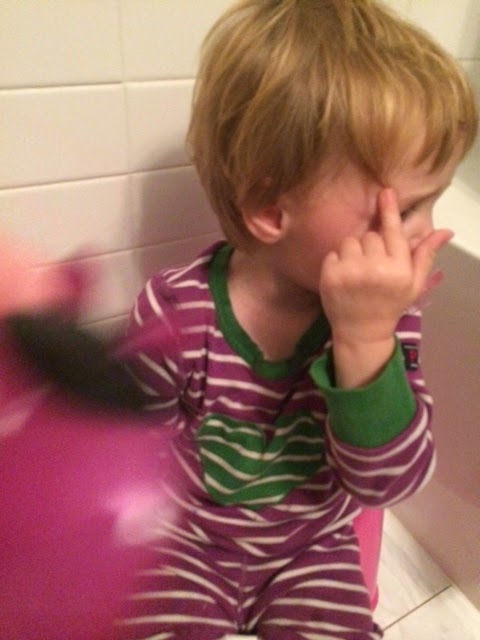 9. She loves Daniel Tiger, Piggie, Winnie the Pooh, Ponyo and many other endearingly sweet characters.
8. She idolizes her sister. 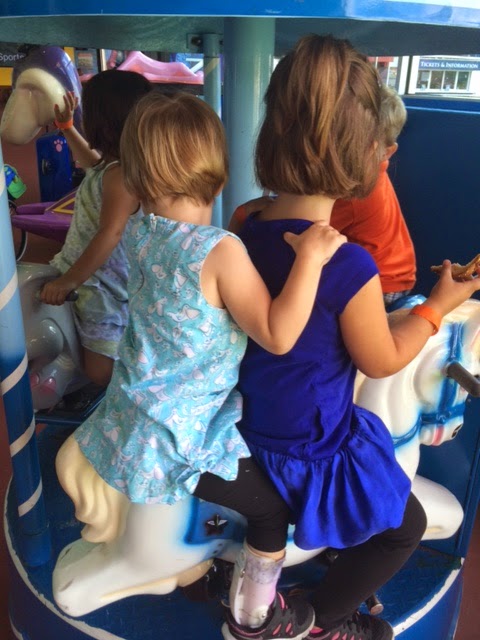 7. She helps take out the garbage.
6. She likes to have her nails painted.

5. How badly she wants to walk and how hard she works at cruising, climbing and taking steps every single day. 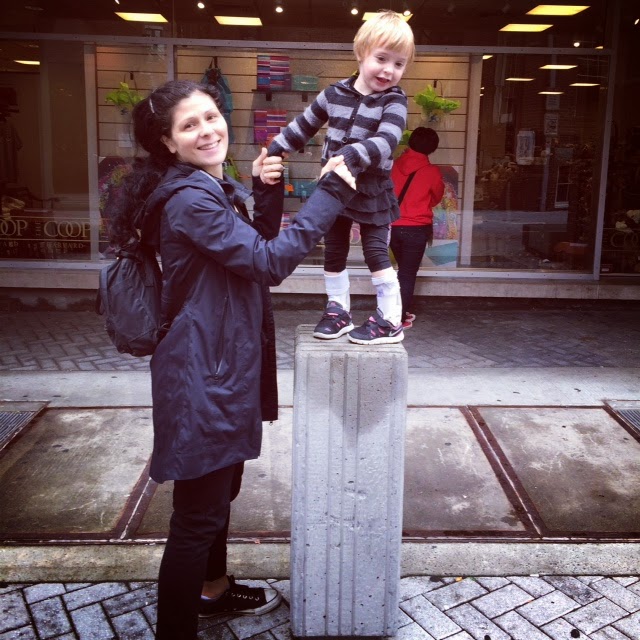 4. She has surpassed every expectation any of her doctors or therapists have ever had.
3. I watched her come out of my body when I gave birth to her at home and I was the first person to hold her and kiss her.
2. Her amazing manners: she says please and thank you without being asked.
1. She gives the best hugs of anyone I have ever met.