Vacation All I Ever Wanted, Vacation Have To Get Away


It's a dark and stormy night and I'm nestled under a blanket on the couch in a tiny rented condo on the tip of Cape Cod. I can hear the rain patpatpat on the windowpanes and the wind is howling between the trees outside. As I type I realize I am living a childhood dream right at this very moment. I feel a little like Meg Murry from A Wrinke In Time, all grown up. My children are sleeping in the next room. My spouse is reading a book beside me. I have a cup of tea and a head full of ideas and as nature rages around me I am missing nothing but a big old dog at my feet to complete the visual. And I'm so happy.

This is our summer vacation and I'm in my happy place. I didn't always, but now I guard my family time as fiercely as I can. Four years in a row we've come here to get away and every single time I worry about whether it's the right choice.  We have a lot keeping us home. For weeks, even months beforehand, I debate with myself about whether I can take the time from work. I also stress because vacation sounds like luxury and for our single income family trying to stay afloat in the most expensive city in the country, luxury is something we just do without. Since becoming parents, vacation travel has been a debate of can-we-really-afford-to-go-away versus can-we-really-afford-not-to. So we scrimp and save and we keep it simple. We go off season so it's half the price. We rent for a week or use airbnb and we cook at home. We fill our pockets with shells and rocks and buy little more than snacks and trinkets. It isn't about all the things to do and see and buy and eat. It's about relaxing in a pretty place together, away from work and school and the computer and the phone and the school bus and the bills and the appointments and the meetings and the millions of things we cram into every single day of regular life. This year the usual debate came to an abrupt end when someone just instructed me to go when I wavered. It's absolutely necessary, she said; we need this precious time together. Away. Just you four.

The thing I worry about the most, more than the finances or being away from work, more than Bee missing school, more than finding care for the cats, more than anything else, is pulling Teeny from her services.

She's been getting services for three years now and each time she misses anything, I get nervous. DOE funded services in CPSE are a precious commodity and even one missed session feels like a terrible loss to me. The DOE worries about this too. They want to know that we take her education and related services seriously, probably because they foot the hefty bill. Teeny has a 12-month IEP which means that the DOE feels she is at risk of regression if she is without services for any length of time. In fact, we were told that if she had more than five consecutive unexcused absences, the school would have to report us and her spot could be given to someone else. Knowing this and knowing that she needs those services desperately, I fear that I am being selfish by pulling her out to bring her here, where for a week she has not worn her braces, used her walker, sat in her wheelchair, strung beads, worked with play-doh or done any of the many things she does painstakingly every single day.

What I forget is that children need time to connect the things they learn in the therapy gym and speech lab to real life. Two years ago in this town, she crawled up a flight of stairs for the first time by herself. She was five steps up when we noticed. Last year, she played tentatively in the sand with her sister, feeling the strange texture between her fingers and toes with curiosity instead of fear. And this year she has simply taken off. It's like the real world is one big OT, PT and speech session in which she has finally put together all the things she's been learning separately.

This week she slung an arm casually around my neck as she nestled into my chest, semi-strapped into an Ergo she outgrew two years ago. She told me when her legs hurt and she needed me to adjust how I carried her, and when they felt fine. We chatted about all the things we saw as we walked along the beach. Together we bent down together so she could pick up dozens of rocks off the sand and toss them into the water. She dipped her fingers and toes in the cold water and puzzled over the way the salt left her feeling sticky and damp. On a hot day, the girls buried themselves up to the waist in the sand. 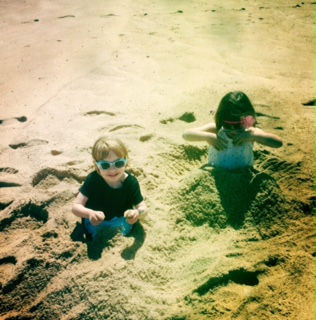 She rode in her sister's lap in the stroller, the two of them snuggling and cuddling and giggling like only sisters can. They made up songs together that she not only remembered but sang to herself for days. She held her pee and poop "like big girl!" and used unfamiliar bathrooms all over town, staying almost completely dry all week. She had unstructured time in a wonderful playroom in the town library, had time to color with crayons, markers and pens of different sizes and widths on a big roll of easel paper we taped to the living room floor and she mostly listened as I read an entire 255-page book aloud, one chapter at a time. 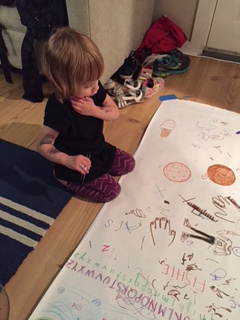 While Johnny and I snuggled on the couch reading, she played with letter-writing apps on her iPad that strengthen her fingers, coordination and pre-literacy skills. She has eaten probably hundreds of French fries and drank numerous fancy green smoothies. She allowed her sister to give her sixteen temporary Frozen-themed tattoos, making her look like one bad-ass three year old. She cruised along tables, chairs, benches and other pieces of furniture or structures using only one hand to steady herself, repeatedly refusing my light but concerned touch on her back or bottom to keep her steady. She actually walked, probably 20 or so barefoot paces down Commercial Street, pushing the stroller weighted down by her big sister.

She has a long list of landmarks she looks for as we walk through the town's main drag. "Let's go see fishie!" she'd say, knowing we were a few blocks from the bench in the center of town with the big metal fish decoration on it. "We almost there to fishie!" That fish, whose engraved letters are perfectly sized for little fingers to trace one by one as she murmurs P-R-O-V-I-N-C-E-T-O-W-N, is a favorite of mine too. She also loves the froggy in the doorway of a local shop, taller than she is, with arms outstretched and waiting for her hug every time we pass it. The ice cream store. The rainbow pinwheels. The puppy on the window of the coffee shop. The beach and its dozen or more access points up and down the town. The enormous anchor near the pier: our number one destination every time we leave the house because I love how it appears smaller and smaller as the girls get bigger. 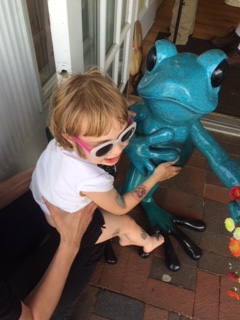 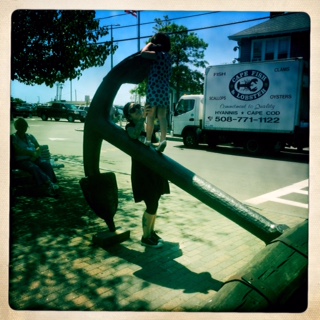 And boy has she talked. Yesterday she looked out the window and casually uttered the longest sentence she's ever said. "I want to go for walk and get ice cream," she announced. "But," she added, pointing outside, "it's raining." I marveled at this and realized she's been talking this way all week. This past Sunday was Johnny's birthday and all day long she announced it to anyone who would listen. "Today my dada birthday!" she shouted again and again. She took my cheeks in her hands and made me look at her. "It Dada's birthday!" she said seriously. "Soon my birthday too!" she added. Not until September, I reminder her. "September," she repeated. "That's soon." We've been having actual conversations that go beyond singing happy birthday or needing to pee or wanting a cookie. We talk about all the things we have to do and the order in which we'll do them. Like today in the town library, she crawled into the bathroom with me at her heels and instead of letting me get her up on the seat, she sat on the stool and said "First, you pee. And then, I go pee. And then Daddy go pee. And then Bee." She counted us off on her fingers as she spoke. In a coffee shop, a stranger asked how old she was. She surprised me by answering "almost four," instead of three. These are complex, sequential thoughts that even two weeks ago she couldn't articulate. Her language is suddenly peppered with colloquialisms which make me chuckle. I asked her if she wanted pasta for dinner. "Ummmm," she deliberated, "I think, nope." And then a second later, she reconsidered. "I think, yep." Normally sounding like an Eastern European immigrant, she began to use pronouns, articles and other words to more fully form her sentences this week. "That's she toast," she tried, referring to her sister's breakfast. And she must have said "I want to sit your lap," six million times this week, instead of last week's "I want sit lap."

We don't use sign language in our family because her speech therapists feel she can articulate well enough without it but I taught both her and her sister the sign for "I love you" so we can have a secret way of communicating the sentiment when we are somehow out of earshot or in need of some extra love. Her fingers, so weak and unable to function independently of their neighbors, have not been able to sign this back to me but this week I caught her trying when I wasn't looking, holding her left middle and ring fingers down with her right hand, while she whispered "I love you," over and over to herself. How cool is that?

Best of all, while there have been some tears this week, I have noticed that her ability to self-soothe is finally emerging and getting stronger. Multiple times, she was able to stop crying long enough able to express frustration, tiredness, pain or hunger so that we could help her solve her problems. She was able to calm herself sufficiently enough to listen to our questions and tell us when she wanted to play longer at something, stop playing something, stay somewhere, leave somewhere, eat more, eat less, walk, crawl, pee, poop, get ice or a band-aid for a boo-boo or just have a hug or a kiss from mama.

Being around her has been like hearing a loud, week-long click. And for that reason more than any other, I am sad to leave this place. Tomorrow we go back to the world we left for one glorious week; back to the work I already miss, the preschool Bee is about to graduate from, the therapies Teeny needs so desperately. But we'll all go back a little different than when we left. 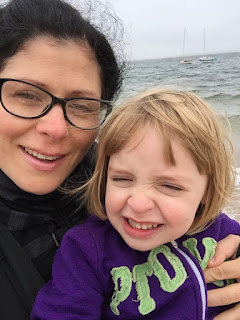