Teeny had two very big appointments last November. The first appointment was with a neurologist at Harvard and Mass General who specializes in cerebellar dysfunction. It took me two and a half years to get this appointment. Back in 2012, post-MRI, I read a bunch of medical articles about cerebellar hypoplasia and saw his name listed as author over and over. I felt like he might help us understand how Teeny learns, since his research led efforts to prove that the cerebellum does more than control motor function. He believes that it plays a role in learning and cognition. This doctor is mostly a researcher who rarely sees patients and even more rarely sees pediatric patients, but I felt that if I could just get him to look at her MRI, he would be interested. So I called and I emailed and I called more and I emailed more and I was on the verge of giving up when I heard an interview with him on NPR here, and this part was like saying Teeny's name:

"Research .... supports the idea that the cerebellum really has just one job: It takes clumsy actions or functions and makes them more refined. "It doesn't make things. It makes things better," Schmahmann says. That's pretty straightforward when it comes to movement. The brain's motor cortex tells your legs to start walking. The cerebellum keeps your stride smooth and steady and balanced. "What we now understand is what that cerebellum is doing to movement, it's also doing to intellect and personality and emotional processing."

This re-ignited my spark, so I started calling and emailing again... and finally, finally, we got an appointment. This is really great news, right? YES. And it was also terrifying. Johnny was worried that he would tell us that we caused this, that we were somehow too rough with her and hurt her brain. A tiny part of me heard the naysayers in my head saying that her homebirth was what caused it, even though I knew better. Deep down I was worried that he would tell us he doesn't know what caused it or how we can help her. I didn't share Johnny's worry because I know we didn't cause it, and he didn't share my worry because he knows that with everything we do with her and for her, we are helping her already. So we had to agree to set aside our worries and just show up with an open mind and hear whatever he had to say.

And what he said was that Teeny has genetically caused pontocerebellar hypoplasia. 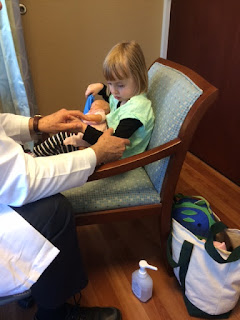 Do not Google this unless you are prepared to see something horrible. The bad news is that PCH is devastating. It's rare. It's often fatal, often in infancy. The good news, if there can be good news when your child has PCH, is that this doctor believes that she has a new variant, and that this new variant is not neurodegenerative but rather neurodevelopmental. That is fancy for the fact that when Teeny learns a skill, she keeps it. She is more capable than she was at birth, where most kiddos with PCH by contrast lose abilities as time goes on. He said there is no question about her diagnosis from her scans but that she has more to teach us all because while she and PCH2A kids (kids with the most well studied variant) have some symptoms in common, such as being small and borderline (or not so borderline) microcephalic, being very sleepy as newborns and hard to rouse, having issues with tone. But where most PCH2A kids have terrible seizures, difficulty with talking and walking, and none of them eat on their own, Teeny is completely different. He was very, very surprised at her abilities. But he didn't really know what to make of what he saw. In short, after three hours of testing and discussion, we left feeling confused. We got a lot of information but none of it actually changes anything. Now we know there is so much to do, but there is nothing to do. We are doing everything right, but there is no cure. There is no way to know how she will do, since most of the children who have gone before her have already died. He said that just by looking at her scans and at the exact areas of damage to her cerebellum, he could predict some areas of strength and some of weakness. He said she could start to seize anytime. But he also said that it was his firm belief that he could prove this was autosomal (genetic) and recessive. He felt Teeny's story has not yet been written, and I asked him if he would be the one to write it. He said yes! I asked him if that meant he would be her new neurologist and he said he would be delighted. We have a lot to learn from him and my hope is that he feels he and medicine in general have a lot to learn from her. 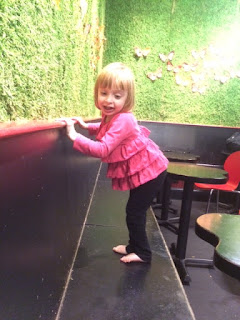 So great, now we know that I didn't cause it and Johnny didn't cause it but in reality, we both caused it because apparently we are both carriers of this terrible thing. How can that be? PCH is so rare that there are maybe 100 cases worldwide, yet he -- this person I really believe is as close to a soulmate as one can possibly have -- and I -- this adoptee with a hodgepodge of unknown genetics --  came together and made this happen? That is too much for me to wrap my head around, so we'll just leave it there for now.

Her second appointment was for a neuropsychological evaluation, which was done the following day by a colleague of the neurologist also at Mass General. We decided to do this to help us understand how she learns and what her potential could be. Schools like these evaluations to help make their admissions decisions because the test evaluates school readiness and, somehow, cognitive potential. It also makes recommendations for educational settings and related services. This test is a very big deal and usually a very expensive deal. When we had it scheduled in New York, we were quoted upwards of $6,000 and no one took insurance. But because this one was set up in conjunction with the neurology testing and because this particular neuropsychologist happened to be in my network, we paid nothing. Not even a co-pay.

The neuropsychologist and her assistants completed the testing in a few hours; it resulted in fourteen pages of confusing scores, recommendations and other details. The document does not do my daughter justice. She is so much more than scores and observations and a litany of things she cannot do and a short list of things she can. And at the same time, the neuropsychologist and those who worked with her that day did have some insights into her abilities and her potential. As much as I hate to admit it, the document does in some way describe her. The bottom line is twofold: one, PCH is so rare and strange that her strengths and weaknesses are a little all over the place (so, for example, she tests very high for "school readiness" but very low on visual spatial skills) so her scores are essentially meaningless because their pattern is that they have no pattern, and two, because of her strong social, emotional and verbal aptitudes, there is no better setting for her than an integrated, supportive classroom.

Which is exactly what we knew all along.