When Teeny first started nursery school, she talked like a cave-baby. Then speech therapy started and we started to see dramatic improvements. Nowadays Teeny tests in the average range for speech, which amazes me because she is hardly articulate and she struggles with pronunciation and clarity. Most of all, she struggles to express her feelings. She doesn't narrate stories, dreams, hopes. She doesn't tell me about her day. All of this depresses me and makes me feel a real lack of hope, but then I see her with her friends in school or on a playdate and she holds her own. When I'm with her I am sometimes struck that I am having a conversation with her, which is something I wasn't sure I'd ever do.

At four and a half, Teeny is very polite most of the time, saying please and thank you and demonstrating genuine concern when others are upset or sick or hurt. Like the other day when she said sweetly, "Are you okay, Aimee?" and I almost choked on my tea. Of course, she is also very stubborn and even bratty sometimes, like most four-year-olds. But this coupled with the inability to adequately express what's going on behind the pout, the crossed arms, the stuck out lower lip or the furrowed brow can be infuriating. Not just infuriating for me, but for her, too. She can be manipulative like any child her age but she has a striking inability to self-soothe at unpredictable times, which means that she can shrug off one "no," but another can send her into a tailspin of hysteria that lasts half the day. Again, very frustrating for all of us. When she was three, she learned to say "I don't want to," and now that she's four, she's gotten better at expressing what it is that she doesn't want to do, but not quite correctly. This makes me laugh sometimes, because it's so damn cute:


A lot of her obstinacy revolves around food, which often makes me see red. She can go for multiple meals with barely eating a single bite, so I get panicked that she will starve. I work myself into a tizzy making what she says she wants to eat, and then:

I don't want to toast. It's too hot. I don't want to peanut butter and jelly. I don't like it. Nooooo. My belly is full. My mouth is zippered up. I'm done. I'm finished!

She will tell me she "doesn't like" her favorite foods. She will complain of thirst ("Can I have some water please? I promise I won't spill it. Oops. I spilled it just a little bit. I'm sorry, Mama.") but refuse to drink a drop if her water arrives in the wrong cup. She will ask for a specific food, which I prepare in the hopes that she will eat a full meal only to have her turn away from the first forkful of whatever she insisted on having so that I push pasta with red sauce, peanut butter and jelly, grilled cheese or some other sticky, disgusting thing into her hair or her ear. In an attempt to block a spoonful of cereal with soy milk or oatmeal with maple syrup from reaching her mouth, she will send it flying across the room or into my lap. She will sometimes chew a mouthful for five or six long and aggravating minutes, pointing to her mouth and shaking her head when I try to give her another mouthful. Other times, she will press her lips together and refuse a single bite, and then about ninety-five percent of the time if I try again ten minutes later, she opens her mouth happily and eats the whole thing like there was never an issue in the first place.

She keeps a sharp eye on her sister, which is both wonderful and terrible. What Bee uses skillfully can often be challenging for Teeny's fine motor skills, so I cringe when I hear things like: 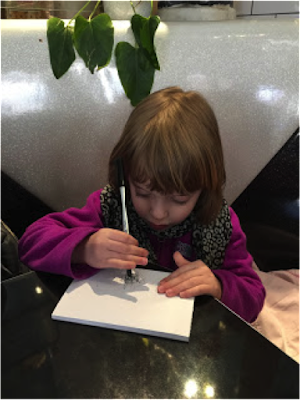 On Saturday mornings they wake up at dawn, so we sometimes bribe them with iPads so we can sleep another hour or so. This is often a total tease for one of us (usually me), because of this:

When they were babies, our girls slept with us, but they have both been sleeping in their own beds for years. Unless they are sick. When either of my kids is sick, I bring her into bed with me so I can listen to how she breathes, get her quickly into the bathroom if need be, take her temperature, give her medicine, etc. Of course the first day she's well enough to go back to her own bed, there's always a protest. Bee will cough weakly and say, see? I'm still sick, Mama. This tugs at my heartstrings a little but I don't fall for it. This past week, Teeny and I have both been really sick and she spent two nights in bed with me, coughing and snotting in my face and in my hair and scooting her feverish little body into mine. So on the third night, I was not at all surprised to hear this:

Can I sleep in your bed? Well, but I'm sick. I'm still siiiick! Mammaaaaa I don't want to own bed.

And since she was well enough to sleep in her own bed, she certainly assumes she would be well enough not to need cough medicine. So this recent little monologue made me laugh:

I don't want to medicine. But I need medicine to feel better. Can I have some cold water in a mama cup? No, in my Bubble Guppies cup. With my purple straw. Because purple is my favorite color! (After getting her cup) See? I feel better!

She knows she has to wear her braces most of the time, she knows she has to hold on with both hands when trying to walk, she knows she can't watch her iPad on school days, and yet she fights us on all of these and more nearly every day. She knows how to blow her nose but won't do it, much preferring to ask me to come wipe her nose every two seconds, like when I'm driving and it's really convenient. She loves to flush the toilet but doesn't get why we want her to close the lid and then flush instead of the other way around. Manipulate, manipulate, manipulate.

When I try to be manipulative back, she outsmarts me. Like the other day when it was something like seven degrees out and I was trying to convince her to wear a hat to the school bus and she wasn't having it. Teeny, want to see your cute hats? Can I show you the cutest one? I asked. She narrowed her eyes at me. I want to see a hat but I don't want to wear it.

And today, when she decided she had to pee the second she was buckled into her car seat and we were ready to roll, she surprised me again. I was exasperated, we were running late. I chided her: "Why didn't you tell me you had to pee when we were still at home?"

Because, she said, you didn't go in potty with me and then we leaved.

She was right. I had forgotten to sit her on the potty just to try, the way I usually do in the morning. In fact, she even brushed her teeth sitting at the dining room table this morning because I was juggling so much. Outsmarted again. 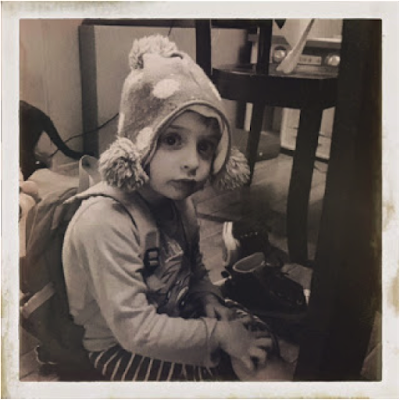 The good news is that she is working through a lot of her difficulties in play therapy, which is basically counseling for the pre-verbal set. She works through a lot of issues around self-soothing, transitions and her growing frustration about what her body will and won't do with her school psychologist. They use dolls mostly, but also play games too, and they work through a lot of feelings. Nowadays anyone in our house can expect to hear Teeny say "You be mama. I be baby" a dozen times a day. She likes to cook in her play kitchen, pack her backpack full and pretend she's traveling, drive her dolls to Nana's house, stick me in her bed so she can tuck me in, act out mama-and-baby scenarios with her mermaids in the bathtub, and so on.

To entertain myself, I compiled a list of other things that have come out of her mouth in the past couple of weeks. I wanted to remind myself that she is speaking in mostly complete and somewhat sophisticated sentences, that she is clearly watching her adult and peer models and copying words from them, that she understands synonyms and antonyms and has multiple ways to say the same thing, that she is expressing abstract thought and not just concrete needs and best of all, that she has a sense of humor. I was pretty impressed with what I collected. For example:

Best of all, I love that she has come to depend on certain rituals. When I leave for work in the morning she crawls to the door and watches as I put my coat on. "Wait!" she cries when I pick up my bag. She holds out her arms to me. "Kiss and hug!" and then as I walk out, "Another hug! And kiss too." I love this and could go back ten times for more kisses and hugs. Every night when we tuck her in, I whisper in her ear, telling her about all the things she has going on the next day. She loves this part of bedtime and if I forget, she will call me back and ask "What we doin' tomorrow? Do I have school tomorrow? And then swim class? No? Do I have ballet? And then, what? And after that, what?" And then I hug her and kiss her and she hugs me and kisses me and as I leave, she calls out, "Goodnight! See you in the morning! Sleep well. Have sweet dreams!" 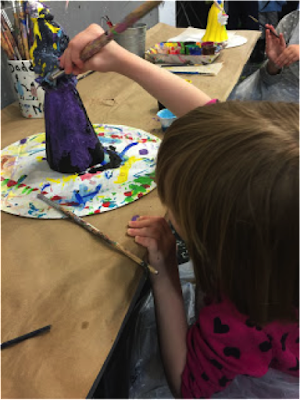