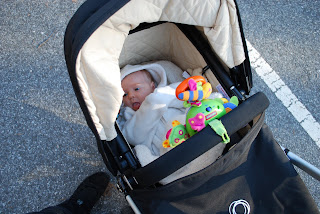 There are a million times a day when, as a new parent, my heart swells with love for my baby. I've written about some of them. There are also a million times a day when my heart breaks into tiny pieces for my baby. Some make sense to me... like when she gets all red and scrunches up her face, pokes out that quivering lower lip, and turns into a tomato. In those moments, which, thank the gods, are pretty rare, I would do literally anything to make her feel better again. Anything. I know it's totally normal that she gets gassy but still, it kills me that not all is right in her world. I feel pain every second that she is not giggling and smiling or peacefully sleeping or nursing or being quietly and happily alert.

Three or four times now, I've awoken to find Thora next to me, looking up at me sweetly and patiently and wide awake, with her thumb in her mouth. She looks perfectly happy, but for some reason this tears me up a thousand different ways and I'm not really sure why. Perhaps I feel guilty; guilty that I am so tired, that she woke up before I did and I didn't sense it within a millisecond, that she was considerate enough not to make a giant fuss, that she let me rest, putting my needs before hers. I don't know. Perhaps it's just the Jewish guilt I can't shake, or the Catholic guilt I married into, that is looking for failure on my part where there is none. Whatever it is, I hate seeing her suck her thumb. It pierces me in a vulnerable place that I don't like admitting I even have.

An aside: I also hate pacifiers. They seem to me like an easy way to shut an unhappy kid up without really addressing the problem. Pacifiers don't satisfy hunger, they don't change diapers, warm a cold baby, or do anything (as far as I can see) but provide cheap and temporary distraction. Okay, maybe that is a blanket statement - as I have only been a parent for four and a half weeks, I really could be talking out of my you-know-what. Admittedly, I have seen many babies be soothed by a pacifier and hey, if it helps, it helps, but it's an irrational feeling I can't talk myself out of. All the same, I do carry a pacifier in the diaper bag just in case she freaks out screaming in public because at the very least if she is ever that unhappy, I don't have to let everyone on the block know it. That has not yet happened. The one time she was so inconsolable from gas that I was reduced to trying one (at home, thankfully), she wouldn't take it anyway and secretly, I was relieved. It didn't occur to her to try her thumb then, perhaps because I was there with two milk-producing nipples, my arms, and my voice, and her daddy was there to sing and dance the gas bubbles into submission. Armed with all that, we eventually calmed her down and got her to sleep.

It's probably the most normal thing in the world for a baby to try sucking her thumb, after all, when she's hungry and wants me to know about it, Thora will try to nurse on anything: her shirt collar, her daddy's shoulder, my mouth, my nose. I know that fetuses will suck their thumbs in the womb. But when I see her with her thumb in her mouth, normal or not, I still hate it.

Maybe I do know why it bugs me so much. Here's a confession: I sucked my thumb for so long that I feel like I reached adulthood before I gave it up. I typically tell people I didn't stop until I was twelve. That may or may not be true. It may have been much earlier or it may have been much later when I hung up the security blanket and traded the thumb in for nail biting and, later, Newport Lights 100s (ugh). What absolutely is the truth is that when I was going through some pretty painful times as a teenager and in my mid-twenties, I tried everything I could think of to self-soothe and at fifteen, sixteen, eighteen, even twenty-five, I wasn't above trying to curl into a fetal position (listening to Pornography by the Cure on repeat, of course, or some other equally miserable record) and shoving my thumb in my mouth to see if it would help. It didn't really quite do the trick anymore, but it did conjure up some faint and weird muscle memory or whatever you might call it, back to when I dragged that stinkily delicious blanket around with me and sucked so long and hard on my thumb that my mother would catch me and snap "Get your finger out of your mouth!" or just "Finger!" for short, probably because she said it a hundred times a day.

But that blanket and my thumb righted all wrongs, I tell you. Why couldn't it be that easy when I was a teenager? Why can't it be that easy now? Why does Thora have some instinctive desire to soothe herself in that same way and why does it bother me so much? Do I feel like I am doing something wrong? Am I worried that she will become a nail biter, a smoker, or an obsessive Cure fan? Or is it the beginning of a lifetime of feeling like I have to do better for my child than I did for myself? Whatever the case, I realize I need to let myself off the hook. Which of course would be much easier to do if I never ever saw her with her thumb in her mouth ever again.
Posted by Teeny and the Bee at 7:35 AM