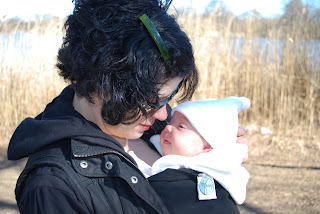 Yesterday Thora had her one-month pediatrician checkup so I wrapped her up in the Moby and we headed to Park Slope on the subway. I've loved these visits so far because all you do is pay a co-pay and a bunch of people with medical degrees and stethoscopes tell you how cute your little naked baby is while you stand there and feel proud. If they've done anything actually medical so far, it has gone right over my head. However, I knew this appointment was going to be a bit more challenging than the last two because they wanted to vaccinate her and I was going to have to Exercise My Rights As A Parent and say no, which I did. They didn't throw me out and say I was a terrible parent, which was nice of them. Instead they said they would talk it over with me more next month and we could look at their delayed schedule, and I could decide what I wanted to do then. What I didn't expect was the way they got out a measuring tape and instead of just checking her measurements, they acted like they were giving her a bunch of tests. Or maybe I just felt like she was getting a bunch of tests, because they gave her a bunch of grades! Grades - at one month old!

I admit it, I am a compulsive A student. I'm as nerdy as they come. I am fine with any grade as long as it's an A. I am okay with "doing my best" as long as I ace tests and papers, get positive feedback and constant praise. I nearly killed myself with three courses in an MBA program last semester while working full-time and being in my second and third trimesters of pregnancy and even then found it next to impossible to cut myself some slack when I got a B in Statistics. This is a standard I hold only myself to, however. When I taught high school I refused to inflate grades and I loathed grade-grubbers and their parents. (Yes, I had parents come visit me to beg me to change their child's grade. Is that crazy or what?) I do not plan to be that kind of parent and I sincerely hope that Thora does not turn into that kind of student. I do not want her to be a slave to her report card or to competition or to doing one better than the neighbors' kids. I want her to enjoy learning at her own pace and do the best she can. But today I was so rattled that the impulse to ask the parents of the infant in the next exam room "Hey lady, what did your kid get on the growth tests?" was nearly impossible for me to suppress (but I did). When they start grading a four-week-old baby, how can you, as a parent, keep from feeling judged and from wanting your kid to be better than the kid in the next exam room? How do you then keep your child from feeling pressured into being competitive?

Last week a friend of mine was marveling at how big Thora has gotten. She asked me how much she weighed, and I honestly didn't know. She was 9 lbs 2 oz at her last appointment, I told my friend, but that was over two weeks ago. "She could be 12 or 13 pounds by now!" my friend exclaimed. So when we got to the weighing part yesterday, I was devastated to see that Thora was only 11 lbs. I instantly worried that I was starving my child with my meager milk supply and was terrified the pediatrician was going to try to guilt me into supplementing with formula. But she looked at me with a big smile and said "Wow, she's a big baby! I can't believe how well she's gaining. What a good little breastfeeder!" So I was worried for nothing.

They measured Thora everywhere. Her weight, her length, the circumference of her head, all over. They entered everything into a computer, which spat out a form marked "CONFIDENTIAL INFORMATION" and they handed it to me with her yellow (and empty) immunization chart. I looked at it - all charts and percentages. I realize the importance of measuring and tracking a child's growth in case something goes wrong. But the charts and percentages, are they necessary for new moms? Especially on a form marked CONFIDENTIAL INFORMATION? It looked like a report card to me, one whose sole purpose is to terrify new parents and make them wonder what every other parent knows that they do not. I felt like, wow, my kid is getting graded already? She's in the 90th percentile for length and 93rd percentile for weight and 78th percentile for her head circumference. How is it that my child is an A student in everything but head circumference? To a geek like me, a 78 is a bad grade. It's a C+! I never got a C+ in my whole life. So I thought, How can we get that grade up? Does she need a head circumference tutor? Does she have to stay after and do extra credit work to catch up to the other kids? Do I need to worry? And worse, Did I do something wrong? Am I a C+ parent?

Johnny texted from class to ask how the appointment was going. I said, she's at the top of the charts for weight, isn't that great? "Errr," he replied, "is she fat?" I slapped my forehead. Fat! I was worried she was starving and he's worried she's obese. Ridiculous. Why do they do this to us? I don't care about how Thora measures to other children. I just want to know: Is she growing well? Is she normal? Is everything okay? Just tell me everything is fine and then I don't need to agonize over why she gets an A in weight and an A- in length and a lousy C+ in head circumference.

The pediatrician looked at me and must have read my frantic mind, because she smiled again and said, "Don't worry, she's perfect!" Phew!

I'm a pretty laid back, even-keeled parent so far. It's only been a month, but I feel pretty confident in my ability to parent Thora rationally, and I wasn't about to let this get me all worked up. The whole grading thing was silly, she was fine, and we have years to go (if ever, I hope) before we have to worry about real C-pluses. I told myself these are fine percentages and the pediatrician assured me all was well. But then when I got home my mother called and started asking questions. "How's the baby? How was her appointment? How much does she weigh?" And you know what's sad? I told my mother that Thora is in the 93rd percentile in weight and 90th in length, but did I mention the low grade in head circumference? Nope. I couldn't bring myself to.
Posted by Teeny and the Bee at 6:25 AM