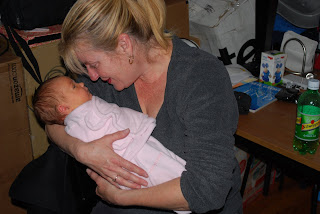 Today Thora's paternal grandmother is coming to visit. This made me think about names. Not baby names, but the names the baby learns for everyone around her.

Thora is the first grandchild on both mama and daddy's sides, so the grandparents and aunts and uncles all had to figure out what they wanted to be called. "Whatever she wants to call me," is what most of them said at first, not realizing that Thora will grow up calling them whatever we tell her to call them, or at least something close.

I have heard stories of relatives getting silly names because the baby couldn't say the real one, like my mom's grandfather was "Gankaw" because my mom couldn't say "Grandpa" when she was a baby. Then everyone called him that of course.

My maternal great-grandmother was Nana (Nana Bea, for whom Thora Bea is named) and my maternal grandmother was my Nana Ellie so of course my mother knew right away she wanted to be Nana as well. My father had a harder time, hemming and hawing, but eventually settling on Poppa. I called my dad Poppa when I was little and only changed to Daddy when I was five or six, no doubt succumbing to peer pressure in school where everyone else called their fathers Daddy. But Poppa works well for Thora. I like it.

Johnny's parents are having a tougher time. His mother shyly suggested "G-Ma" and we both wrinkled our noses and laughed, thinking she was kidding. Whether she was or she wasn't, G-Ma is currently off the table completely and she has no grandmotherly name yet. Her mother is Nan to her four children so I just assumed that she would be Nan as well but I guess she doesn't like it? I love it and remember all the friends I had with Nannys and Poppys, but I won't force it. Johnny's parents from his biological father's side are formal and he calls them his Grandmother and Grandfather Christian. How horrible. I'm glad at the very least that no one has suggested Grandmother and Grandfather Kroog. If Johnny's stepfather decided on something for Thora to call him, I can't remember what it is. We talked about it, but I can't remember. Gramps? Granddad? It was something unusual to me.

As for me, I don't particularly care for "Mommy," but I am prepared for the inevitable. I loathe "Ma," as it sounds like whining. "Maaaaa!" Ugh. "Mom" is passable but I think I like "Mama" the most, at least for now. It works in so many languages and it sounds sweeter and a little more in tune with the way I hope to mother my daughter. I call my own mother "Mom" but at 37 I still call my father "Daddy." I guess am a Daddy's girl even now.

I catch Johnny calling his mother "Mommy" and I tease him about it but really I think it's kind of cute. After years of calling him Jimmy, Johnny now calls his stepfather "Dad" and refers to him as his father, which I think is wonderful. We agreed originally that he too would be Dad to Thora but we both find ourselves calling him "Daddy," so it looks to me like for now Thora has a Mama and a Daddy and a Nana and a Poppa and the rest is still TBD.

She also has two aunts and an uncle on Johnny's side and if they are Auntie or Aunt or whatever all still remains to be seen. Johnny has six million aunts, uncles and cousins. His family is so big that he himself has trouble remembering who is real family and who is a friend of the family that he grew up calling "aunt" or "uncle." That gets very complicated and I hope to avoid it for Thora.

As an only child, I have no real aunts or uncles to offer her. But our dear friends Missy and Karl will be her auntie and uncle by default, as their new baby Vaughan is two weeks younger than her. If that doesn't earn him cousin status, I don't know what does. On my mom's side, I have only one uncle and his wife is my aunt. I have a great aunt and her husband was my great uncle. The rest of the great-aunts and great-uncles were either already dead or in Florida or Oklahoma or somewhere that seemed too far away for them to count. It's only now that I am excited about all the cousins I have all over the country. I barely saw any of them while I was growing up but Facebook has brought us closer now and I love it. On my father's side I have no one. His father died before I was born and his mother when I was very small. My father had a sister he never talked to and she died some years ago, thus I have two cousins (her kids) that I never talk to and whose names I don't even remember. Then there is my biological family. As I have reunited with my birth mother but not my birth father, they are really only half of my biology. They are wonderful people and are technically and biologically grandmother, aunt and uncle to Thora -- but only technically and biologically. I have found that naming the relationships in the reunited family of an adopted child is most confusing and challenging. We struggled with it for years and eventually skated around it and settled in a nearby place where we toy with names like birth mother and biological daughter, sister or half-brother, and other names that are true but don't really sound right. I really did think about this long and hard when I was pregnant. Will Thora have a third grandmother? Will she have another aunt and another uncle? And in the end, I think not. I think she will have an extended family in them, to be sure, but they will not have the honorifics that I now believe should be reserved for my family and Johnny's family and our very closest friends.

So Johnny's mother, who is at the moment adamantly not G-Ma, will probably end up being G-Ma just because it's so funny and cute. It sounded thuggish to me at first but it's growing on me and it might become one of those funny family stories like Gankaw's story for my mom. You can't have enough of those - it's really the stories, and not the technical or biological names or connections by marriage or birth, that make a family.
Posted by Teeny and the Bee at 11:42 AM