I *heart* Health Insurance and Other Musings

As a new mother who just got the hospital bill from her birthing in the mail, I would like to take a moment to thank my employer for being a not-for-profit organization that offers a decent wage and excellent benefits to me, my husband, and now, my daughter. And yesterday our president signed the historical universal health care bill into law. This means a lot more people will have the chance to be as fortunate as we are, I hope.

The balance of the whole thing from pre-conception to two days old not covered by my insurance? $100

Seriously, you can't beat that. Oxford drives me crazy sometimes, but today I am VERY grateful.

Everyone said babies would be expensive. But so far absolutely everything has been covered except for that $100. Our friends and family were extraordinarily generous at our showers. Nearly everything I registered for was purchased and a lot of people who know more about babies than I do gave us other things I didn't think to register for but now cannot imagine living without. We use cloth diapers and of course breast milk is free. I really need to calculate how much this kid could be costing us every month and make sure I deposit that amount into her 529. Which I swear I will set up one of these days.

Thora is now five and a half weeks old. I really can't believe that five and a half weeks ago there was no Thora in our lives yet. It seems like she was always here. She's growing at the speed of light. I feel like if I just sit and stare at her, I could almost see her growing. Every day she looks different. For one, all her hair is falling out. Okay, not all of it. Some. She looks very silly going through this transition, kind of like a reverse Franciscan monk. Her hairline is receding back and up above her ears so what's left looks like little tufts that form a fuzzy yarmulke of hair. (Holy mixed metaphors, Batman! Monks and yarmulkes!) It's definitely going to be lighter, possibly auburn or blond.

A few weeks ago, I discovered that she has a "stork bite," which, as I learned on Monday, is a red birthmark on the face or the back of the neck. They are all temporary and disappear in the first months or years, except for the ones on the back of the neck. Thora's is, of course, on the back of her neck, so she's stuck with it. At first we thought it might be a bruise but then it stayed and now I don't even hate it anymore. Really, it's kind of cute and it will be hidden by her hair anyway so it's no big deal, especially since the freckle I thought I saw weeks ago has disappeared. And it figures that a child of mine would come into the world already bitten by a bird!

What else? She is getting chunky! Lots of her clothes are too small now. I packed up all her newborn diapers and newborn size clothes and even some of her 0-3 onesies and sleepers are getting too short. She's wearing her BumGenuis diapers now and we sometimes do prefolds as well, so I bought larger size covers for them since the prowraps we had barely fit around her anymore. She has big round cheeks and plump arms and fat little thighs. It's so cute! She's a lot heavier than she was. She makes a lot of noise. There are the coos and gurgles like before and now a new zombielike sound when she's sleeping or nursing: "Aaaaagh... aaaaaaaaghh." She is holding her head up very well and when she's quietly alert, she follows us with her eyes. She focuses on toys, on the black and white pictures above her changing table, on the Jacques the Peacock, on the contrasty bugs. She has taken two bottles so far with ease, just sucked them down like the boob. She prefers to sleep on her side than on her back, and she usually sleeps with one arm tucked under her head like she's deep in thought (see photo). 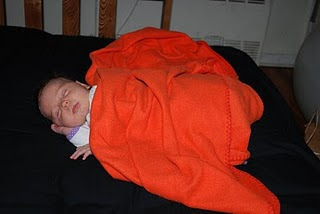 And she smiles. Oh, what a smile she has! I've even heard her giggle a couple of times - or at least it sounded like giggling - and it is the most incredible music I have ever heard in my life.

But the absolute best part (and by best you know I mean worst but I still feel guilty if I don't say that I love every second of parenting so far) is that she is also sometimes very fussy. And when I say fussy I mean she's absolutely perfect as long as I am holding her, nursing her, wearing her, swaddling her, singing to her and reading to her all at once. It's only when I stop any of those activities that she fusses. Evenings are worst. There's an article on kellymom.com on evening fussiness and cluster feeding that basically describes our kid, so I gather it's common. It's like babies know that you are most tired in the evenings, most unable to pretend you have twenty arms and unflagging energy. They somehow know it's when their daddy is about to go to bed and their mama wants more than anything to go with him. When she's fussy she can nurse for hours and hours, until I feel like I have two empty sacks for boobs and would give anything to get out of the stupid glider and do dishes, check my email, go to the bathroom, anything. Johnny looks on helplessly. He will gladly dance and sing and walk and read too, and I rush off to try to nap, but then, as I am about to close my eyes, I hear the inevitable "Mama, she's starving!" So most nights, he is dismissed off to bed and I wear her in the Moby wrap for hours, walking around, bouncing on the exercise ball, reading out loud. We've blown through Charlotte's Web, The Phantom Tollbooth, Charlie and the Chocolate Factory. We are now on Winnie-the-Pooh. Of course, just about anything will do. If she's fussy, I am not above reading her Time magazine articles, toy assembly instructions, whatever is within reach. Johnny caught me reading her the notes that came with a Lamaze toy in English, German, and French. Then there are some evenings when nothing seems to console her at all and I feel like I will die of old age before she falls asleep but then I remember the one tiny thing that worked briefly last week and I try that thing, whatever it is, and she conks right out. The good news in all of this is that when she does this fussy-evening-cluster-feed thing and she finally does fall asleep, she sleeps for about six or seven hours in a row, which means Mama sleeps six or seven hours in a row, which means we are both rested enough to do it all over again the next night. Yay!
Posted by Teeny and the Bee at 7:45 PM