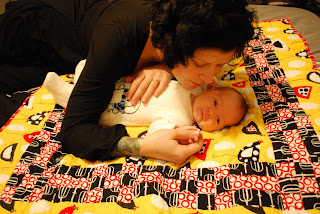 Someone said to me recently, "Wow, you're really into this baby thing, huh?" and for some reason I got all defensive like a teenager and was instinctively like, "Nu-uhh! Am not!" I objected to the very phrase. Really into this baby thing. It was like someone asking me if I was really into a band or a movie or something and it sounded ridiculous and childlike. But then I was like, wait a second. And I thought about it.

I was really into the whole birthing thing, but due to various issues that arose during my pregnancy, I didn't get to have the incredible homebirth I planned or even a natural birth or even a vaginal birth. Ah well.

Also I didn't get to nest like most women while I was pregnant. For the last fifteen months, we have been about to move into a two-bedroom from the one-bedroom we're in (it's a really long story), so during the pregnancy we didn't get to decorate the baby's room like so many other people do. We didn't even get to unpack her furniture, her gifts. We didn't choose paint, we didn't pick a theme, nothing. I divided things into newborn and everything else. I set up the dresser and the co-sleeper and absolutely everything else that she didn't need right when she came home stayed in bags and boxes. She has a giant pile of boxes at one end of the living room that has pushed us further and further into the other end and that is such a growing eyesore of stuff that it makes us look like hoarders.

Now that the move is scheduled for next week and we're packing and picking out paint and new furniture for real, I am getting really into the nesting thing, however belatedly. It's exciting to think that Thora will have her own space to grow up in, to keep the cats out of, to store all the stuff that continues to pile up. Because she sleeps with her mama and really doesn't use or need half the stuff we have for her anyway, Thora's room will be a room for Thora's things and not Thora herself for quite some time, but all the same, I sat with her today in the empty space that will be her room starting next Wednesday and talked to her about where we will put this, where we will put that. I imagined her as a toddler, as a little girl, as a teenager, growing up in that room. It was a little overwhelming, to be honest, but I was really into it.

I confess I am also really into dressing her. For the most part, her clothes are used, taken from friends and family with older babies who have passed them on to us. Being the child of a seasoned Salvation Army shopper myself, I am all for used clothing. I am grateful to everyone who has had a hand in keeping our daughter in cute sleepers and onesies, as we have saved a bundle and she is warm and clean and dry (and cute). Keep 'em coming! However, 95% of everything she has is pink and fuzzy and with hearts or bears or whatever all over it and it's hardly something that says this baby belongs to Aimee and Johnny. So I admit that I am guilty of sneaking into Baby Gap and buying black baby stuff (yes, they have black baby stuff in Baby Gap, which as a rule looks like a huge rainbow threw up all over it. You just have to know where to look). We bought her a black sun hat, a black hoodie, a black onesie, a black and grey striped sleeper with a hood, a red and black striped sundress, black cargo pants, and so on. We bought her a Ramones t-shirt at Trash & Vaudeville and a couple people have given us tattoo or skull themed onesies. Her wet bag for her dirty diapers is pink with a pattern of black skull-and-crossbones. Mixing that stuff in with the pink and the fuzzy and the hearts and the bears makes her look much more ours and as corny as it is, I do get really into it.

I am also really into the fact that Thora is an easygoing baby, to the point where I sometimes worry that I take advantage of it. Everywhere I go, I take her with me and she never complains. Today we were out and about all day. Eight long hours we trekked around the city to an OB/GYN appointment, to the walk-through of the new apartment, to pick up a few things at the baby store, to Home Depot to pick out paint colors, to get food. She slept most of the time in the mei tai and when she didn't sleep, she nursed as we walked, she nursed on the subway nestled in the mei tai, she nursed sitting on the floor of the empty new apartment. (Side note: after being asked by two teenage boys on the street last week if they could be next when they saw me nursing her (eww!), I realized I had to get better at nursing her discreetly in public. Now I am an expert and no one notices, I swear!)

As we are out and about, I am getting used to people smiling at me and at my cooperative baby. I often wonder why people are so into my baby since I was never really into other people's babies. I never really even noticed them, I have to admit. I think about that when I blog. Like, who wants to read this? I mean, my friends who don't have children don't really care about children for the most part and my friends who have children have their own children to care about. So who should care about this baby and her mama's thoughts? I know I don't have anything particularly original to contribute with my online musings, and while I of course think my baby is incredible, I am fully aware that she's no more incredible than any other baby is to his or her mother. And yet, every day someone else tells me they read the blog. Which makes me so unbelievably happy (so thank you very much for making this mama even happier than she already is), because I am really into blogging, even if I don't really get why you all like reading it so much.

So anyway, I am getting used to hearing "I love your blog!" from people I know and other, equally complimentary things from people I don't. "Did you just have her this morning? She's so little! It's great that you're out and about with her!" and "She's so cute! Aw, what a pretty baby!" and "She's so good! I can't believe she just sleeps in that thing. My kids would never have let me stick them in there for that long and take them all over the place. What a good baby you have!" Everyone loves hearing people say nice things about their baby and I am no exception.

It was weird not only that she said this to me on a really crowded train when she was with her significant other and a few friends, but also that she was watching me so intently and admitted it. She was probably nuts but it made me feel so good. Despite this, I don't pretend that I am a particularly better mother than anyone else or that my baby is more amazing than any other baby. But I do get a kick out of seeing how much I have changed. I have always been ambitious and passionate, but as an only child I have also always been somewhat self-centered. Now my life has been transformed overnight into a life that lives for another person. Just as my friends with children told me I would, I now think of Thora before I make every decision. Before I eat, before I sleep, before I go anywhere, do anything, even say anything, I think of how it affects her. I love my daughter with parts of me that never loved anything before.

Later, when I was telling Johnny about the woman on the subway, I remembered the person who told me I was really into this baby thing, and I realized that they were both saying essentially the same thing. And I guess they are both right. I do love my baby very much. And I am trying my hardest to be a good mother. So yes, I guess I am really into this baby thing! So what if I am?
Posted by Teeny and the Bee at 12:42 AM