7 Weeks Old and Back in Manhattan 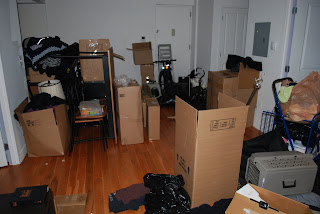 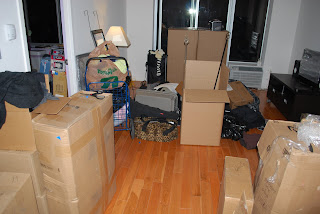 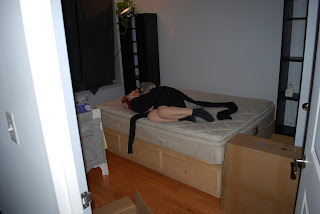 Today Thora is seven weeks old. And in the past week her mama and daddy have aged about seven years.

I never thought moving was that stressful before. But then, I always rented and never had that much stuff. And I never had a new baby. They always put moving up there with truly awful things like death of a loved one, divorce, job loss, etc., and I never felt it was ever that bad. Until now. This week really was one of the most challenging weeks in our lives.

I guess the difference this time was that it was only two weeks ago that we even found out we were moving for sure. Also we are now homeowners (with the help of my parents) which feels a little stressful. And it's a very different neighborhood that we are not yet familiar with. We relied on friends and family to make the move happen, to try to save some money since buying a place and closing and all that got a lot more expensive than we expected. Plus, since we've been on the verge of moving for so long (fifteen months, and a very long story) our mantra for the last year or so has been "let's wait until we move" to do this, buy that, change the other. So we left or tossed or gave away half the furniture and other home items we had and now need to replace. And we have a seven week old baby, which means that even aside from all the apartment buying, packing, painting and moving, the last eight weeks have been the most challenging weeks in our lives bar none.

Thankfully though, I was on maternity leave and Johnny was on spring break from school. Thankfully, Johnny's father has a CDL and took the day off work to help us move and maneuver the million-foot truck we ended up with. Thankfully, Johnny's brother and his sister's boyfriend also came to help us unload. Thankfully, his mother spent her day off painting the baby's room and a friend of ours spent three evenings with us painting, touching up, running errands, moving bookshelves, eating yummy vegan takeout and helping us forget how stressed we were.

All the same, and as thankful as we are, next time - if there is a next time - we are hiring painters and movers. Lesson learned.

These photos are from day 3. On days one and two you couldn't see the floor for boxes, and we ended up camping on the floor. At least last night we all slept in a bed, and I actually managed to locate a sheet after Johnny took the picture of us on the bare mattress but before I passed out.

So, back to Thora. She is back in Manhattan after having been born here and then spending the following six weeks as a Brooklyn resident. She is growing growing growing. Smiling more. Grabbing more. Making new faces, wearing new expressions, fitting into new summery outfits. She's definitely lost the newborn look and is now a very long and plump baby. Unfortunately she has made a few steps back in the bottle progress we were making but admittedly I haven't been trying very hard. My milk stash stayed in Brooklyn as I didn't think it would survive the trip and I've only pumped once this week. I need to start over again with enthusiasm and hopefully she will follow suit.

This week we established the best and worst sleep routine. By best I mean she really does sleep through the night and has for several weeks now. This sort of worries me since our childbirth instructor said that for the first three months, if you are breastfeeding, you need to wake the baby up if she doesn't get up on her own every two to three hours to eat on her own or she might starve. Well she didn't say might starve but that's what I heard and that's what I internalized. Most of me thinks this is hogwash, especially since I subscribe (on my good days) to the notion that my schedule should be her schedule for now and if she wants to sleep, she sleeps and if she wants to eat, she eats and it really doesn't matter when as long as it's what she needs. So while it sort of worries me that my baby might starve, mostly the exhausted new mother in me doesn't care all that much because if she doesn't object then why should I and let me tell you how awesome it is that with the exception of one or two brief feedings in bed, she sleeps eight to ten (and sometimes more) hours at a clip. It's VERY awesome, that's how awesome.

What sucks about this is it somehow means less nap time during the day. Well, she naps plenty, but what sucks about Thora is that nap time only happens now in Mama's arms. She is happiest in the wrap, on my chest, walking, moving, rocking, doing. I can take her anywhere and subject her to almost anything as long as I am in motion. She even will usually stay asleep if I stop moving, but I simply cannot put her down. Putting her down at any point during the day means instantly waking Thora up, no matter how deeply asleep she seems to be, and turning this long and plump baby right back into a sad tomato. For some reason at night it's different. Once she's out, she's out and very little will rouse her. I can leave her lying on the bed and do literally anything near her - light, noise, movement, nothing wakes her. During the day she sleeps soundly too - but only as long as I'm holding her. She doesn't like her bouncy seat or her rocking seat very much yet. Every day I hope this will change. Every day I try both of them again and every day she lasts a second or two longer than the day before but it still always ends with tears. That kind of sucks because it means I am holding a baby about twelve hours a day. I am a doer by nature and I really cannot do very much of anything when I have to hold her. Even in the wrap she needs to have her head supported (maybe I am doing it wrong?) and I can't move quickly like I normally do. I know that is the point of maternity leave - Thora and her needs come first and that is what I am home to take care of. But when you're trying to move, paint, unpack or just help in any way you can, this really really sucks.

So I've been alternating being frustrated that I am so useless and just sort of relaxing into it and reminding myself that there really is nothing more important in the world than Thora's well being and if this is what she needs then this is what I will do. And in between the two I have been trying to help as only a one armed person with a baby strapped to their chest can help. I make a lot of trips to Target and Home Depot - you only need one hand to swipe a debit card, haha. I use that same free hand to dial takeout, to pour glasses of water and open bottles of beer, to push cats off of surfaces they are not allowed on, and to point out flaws in the painting or moving and really piss off everyone sweating to help us, including my poor exhausted husband who has worked so hard over the last few days that he was half delirious yesterday, babbling about things that made no sense to me and singing snippets of songs over and over and over under his breath. Some people were nice about it, referring to me semi-sweetly as "the foreman" and other people were less nice about it, making it clear that my input was not welcome and that I should just go back to nursing the baby and keeping the pointing finger of my free hand to myself.

But now the worst of it is over. The painting is done. The big pieces are more or less where they are supposed to be now. The helpers are done helping and we are home alone and fending for ourselves. We've located clean underwear, I figured out how to use the washing machine, the shower stuff is unpacked. There are sheets on the bed and we taped curtains up so we can have some privacy until we get around to measuring for, selecting, ordering and installing blinds and shades. Now we unpack boxes of clothes and books and pots and pans and put together all the furniture we bought for Thora ages ago that are still in boxes.

Life resumes on Monday - Johnny goes back to school and I have work to do and the regular hubbub of life with a baby will hopefully pick up where we left it before. I got called for jury duty in Brooklyn so I will have to waste a day bringing my baby and her birth certificate to the buildings near Fulton Mall proving that I am a caretaker and cannot fulfill my civic duty. (Yes, they make you go in person to tell them you can't be there in person. Crazy!) There is plenty to be done before that. It will all get done. My big project for today is to find a health food store that is closer than the Whole Foods on 97th Street (that's 2 miles from here) so we can stop with the takeout and get back to cooking and eating the way we are used to. I'm looking forward to exploring. It's gorgeous out and I know Thora will sleep happily as we wander around outside as I rub her back and narrate everything I do and see. And maybe, just maybe, when we get home I will be able to put her down long enough to put the groceries away.
Posted by Teeny and the Bee at 10:18 AM