Saying Goodbye to the First Trimester

This trimester is finally almost over. This is one experience I am happy I will never ever have again. Later dude, and don't let the door hit you on the way out! We are in week 13.

Week 11 was much better than previous weeks. The best part was the ultrasound. I prefer fewer ultrasounds to many, but the few I have, I really look forward to. This was the first one for this pregnancy. The first one we had with Thora, I was barely seven weeks and she was nothing but a speck on the screen. But Newbie already looks like a baby! 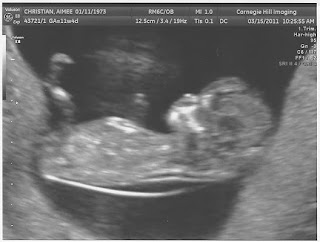 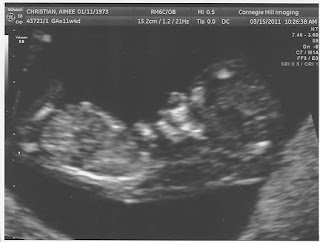 This fetus was jumping all over, wiggling and stretching and generally looking active and adorable. Even though Thora was cranky and tired and overdue for a nap, Johnny and I wept happy tears as we looked at our second child on the screen and I wept more when the sonographer and the doctor told us that our chances of any chromosomal issues were approximately 1 in 4500. The doctor we spoke with told that if we were looking to the nuchal translucency for reassurance, "you sure got it!" Which was good since I really could not have kept this pregnancy a secret a moment longer.

So the next best thing about week 11 was going public. People had been texting and emailing my friends and coworkers asking if I was knocked up again and I was actively avoiding getting together with friends and acquaintances because I didn't want to put myself in a position where I opened my mouth and then couldn't un-say what I'd said. Anyway, I tucked my ultrasound pictures into the scanner, uploaded them to Facebook and emailed them to close friends and family, thus letting the proverbial "dat!" (how Thora says "cat") out of the bag, as if there was anyone left on earth who didn't already know.

Unfortunately, the nausea that I thought had passed came back so fiercely as I sat in the backseat of a friend's Volvo station wagon this weekend that I puked my guts up the second I walked into our apartment. I am sure you want to know that what I threw up was so red I thought for a second that I was bleeding to death, until I remembered that I'd eaten more than my share of tomatoes and cherries and strawberries that afternoon. I know you wanted to know that!

On a happier note, Thora is going through an absolutely adorable phase. We have slowly introduced Sesame Street and The Muppet Show. We don't actually have cable or even regular television channels so we have a few DVDs of both that we put on from time to time. What Thora likes best in each is the theme song. The sketches she doesn't care about yet. She did take an immediate liking to Big Bird. She recognized him in books and on the cover of one of the DVDs. She pointed and shouted "Burr!" very excitedly. So we got her a Big Bird doll. (Are we pathetic or what?) At first she'd walk over to the TV, point at it, and assume her dancing position, waiting frozen until we started the video. Now she takes Big Bird (or any of her stuffed animals, really) by the neck and bounces him up and down and sings the Sesame Street theme song ("Dee dee dee dee dee dee dededee") gleefully and tunelessly). On Sunday we met my parents at Yaffa Cafe on St. Marks for lunch. After we ate, Thora toddled up and down St. Marks Place in her brand new red Keds, absolutely unaware of the hipsters with hangovers trying to get around her. She kept stopping randomly in the middle of the sidewalk to make Big Bird dance. It was hilariously cute. People would stop and tell her how cute she was and she'd look up at them and show them Big Bird - who was almost black with East Village dirt by this point - and wave hello very enthusiastically at them. I wish I could show you video footage of this but every time we try to film her she stops whatever cute thing she is doing and tries to wrestle the iPod from us, yelling "This! This! This!" This video here was as close as we got later that night:

Week 12 included our first official visit to our midwife J. We'd met her once before, back around week 6 or 7, as a consultation. This was more chatting and getting to know each other. She had a midwifery student working with her, which I didn't mind. Thora ran around the office making all their stuffed animals dance to the Sesame Street theme song and just being a general ham. J won my heart first when she said Thora could play with anything she could reach and not to worry if she makes a mess or breaks anything. Then if there was anything left of my heart to win, she won that too when it was time for her to poke and prod my belly and she pulled a chair up to the exam table so Thora could stand on it and watch the action up close. She obviously didn't really get what was going on, but she watched intently and listened to the heartbeat coming through the doppler loud and clear. Johnny was holding her and listening too. I was watching their faces. And at that moment I think we really felt like a family of almost-four for the first time.

There are lots of growing pains in going from a family of three to a family of four, as we are finding out. The quest for the perfect double stroller is causing us a lot of stress. We have the Bugaboo Frog - a great luxury stroller that I love except that it takes up half Thora's bedroom because we haven't figured out how to collapse it yet. Which means we have a second stroller for car and plane rides. Which does collapse but it takes up half the hall closet. So I am ready to trade in my so-not-typically-me $800 bourgeois status symbol for a tandem that collapses, is cheaper, and is generally less obnoxious than a Bugaboo, but seriously, there is something about admitting that you need a double stroller that sits with us like it's admitting you have a drinking problem. It's like if we buy a Phil & Ted's the baby is really coming, but if we stick it out with the Bugaboo, we can pretend it might not? I know we have another 28 weeks before we'd ever possibly need a double stroller and probably a lot longer, as we wore Thora almost exclusively for months and intend to do the same with Newbie. But I'm thinking that since a) the tandems all work as single strollers too and b) I've heard that sometimes a toddler will resist a new stroller when a second baby comes along, it makes sense to buy the stroller now and use it as a single and get Thora used to *her* new stroller, and then it won't be a big deal when we slide the second seat in under her and stick a baby in it?  On the other hand, Bugaboo is releasing a side-by-side double later this spring called the Donkey. (I read a joke that's actually copyrighted by Baby Bargains but that I had to share: is it called the Donkey because you'd have to be a jackass to spend $1000+ on it?) It's unlikely that anything will convince me I want a side-by-side in New York City, but the bottom line is that I guess I still don't know.

The other thing that is challenging about three-becoming-four is the nursing. Despite my half-assed attempts to wean, Thora is nursing strong. Before she was born I couldn't imagine myself nursing a toddler, yet here we are. I always thought I'd wean by the time the kid was old enough to ask for it, but even though Thora is so verbal so young, she's really still a baby. She asks, but she's only 13 months. She's learning a new word every day and has mostly and adorably mastered complicated multi-syllable words like tomato and avocado, but for whatever reason, she can't or won't say milk. She points at me and I say, "Milk, Bea," and she smiles and points again and replies, "Buhh!"

Anyway, my attempts are half-assed because deep down I do not want to wean. I revised my original plan and fully intended to nurse her until she turned two or until I got pregnant again and it became too difficult. But this baby will come a few months before her second birthday, and part of me thinks that if I don't wean her now I will be stuck nursing her until I wean Newbie. I really do not want to nurse two for another three or four years! These days I can distract Thora about half the time when I try, but the other half of the time, she is a determined little bugger who first asks "Buhh?" but then is not above yelling "Buhh!" and yanking my shirt down and completely exposing me in public to get her way. Not that I mind, usually. (The nursing, I mean. I definitely do mind baring my breasts to all the world!) I would happily nurse her all the way through this pregnancy and into Newbie's infancy, especially if I knew I could get it down to just bedtimes. The idea of having to nurse two upon request is not entirely appealing, I have to admit. Plus as this pregnancy progresses, my boobs are getting more painful and nursing is tolerable but not exactly pleasant. But I'm taking it one day at a time and not really doing more than seeing how it all goes. My hope is that Thora weans herself. If she doesn't, I guess I won't push it. After all I guess that's what my boobs are there for. And maybe she will finally learn to say milk.
Posted by Teeny and the Bee at 11:09 PM