I wasn't there for it, but hearing about it from Johnny felt like a kick in the stomach. He was taking the girls to the Y for their swim class when it happened. On our street. On our block. Where we walk a hundred times a day. There was a group of teenagers leaving the playground that my family was walking past. It went something like this:

"Look at that girl in the stroller. She looks fucking retarded."
"Dude, she probably is retarded, just look at her father."
"That thing behind the stroller? Oh shit, that's a man?"
"Look at that fuckin' faggot. Do you see what he's wearing?"

Blissfully, neither child noticed anything because Johnny stayed calm and didn't acknowledge them. He just walked them past the group and to the Y. Then he called me. And a million things went through my head at once.

First, I tried to make Johnny feel better. I tried to make it seem not so bad, like it was no big deal and he should let go of his feelings. At the same time, I thought it was sort of ironic that not four hours earlier, I had posted this video on Facebook:

This video validates the power of words and why words like the r-word are never okay. (Also, I just loved Paul!) I scrolled back down my page and watched it again and I cried thinking about all the people in the world who are marginalized for some real or perceived reason and have to suffer the indignity of being disrespected or mistreated. I cried thinking about my own child who will someday have to find a way to tell mean kids and adults to go fuck themselves, that she is as capable as anyone else. I cried thinking of the times she has already said "I can't" when I encourage her to do something by herself that might be really hard.

Then I got angry. I thought about all the times Johnny or I have been called names and we'd never spoken up for ourselves because we feared for our safety. Johnny's been called a fag a million times. Lots of times when we walk down the street together, men catcall to us "ladies." Cashiers and customer service reps call him "ma'am." I have been called a dyke. A poser, a loser. Freak. Walking past the gutter punks on the Lower East Side back in the 80s and 90s, they'd always catcall at me. "Oh my GOTH!" they'd howl. We have been teased for our clothes, our music, our hair, our shoes, his accent, my last name, my being Jewish, our economic statuses, even our veganism. At the awful summer camp I was forced to go to for ten years because my mother worked there (and therefore I went free), I got made fun of for my area code (really!) and for living in an apartment instead of a house. I was tormented when I was little just because there always has to be someone and I was an easy target. The kids made me cry and because I always cried, they tormented me more. After a while I stopped saying anything to the kids who picked on me and cried alone instead. But the pain didn't go away and by the time I was 12, I had stopped crying. I'd learned to take it out on myself. Eventually, I really believed I deserved their hate and that I deserved to be punished. The ACT UP activists were right. Silence really does = death.

I cried because I don't want my daughters to learn that kind of self-harming behavior. I cried for my younger self, for not feeling like I'd had a support system to help me get though my adolescence and early adulthood. I experienced rage and depression and twice I attempted to take my own life because I felt so alone. I also cried because I felt compassion for those teenagers, growing up without being taught to love and respect others. I felt sad that they probably go home to families who use words like that all the time. They probably thought they were being funny or cool or maybe they just didn't think at all. I felt sorry for them because I was an unhappy teenager too and I remember very clearly what that felt like. I had hated the world. I had hated my life. I know there were things I did and said when I was with my friends that hurt people I didn't even know, maybe for no other reason than I was trying to impress some kid so they wouldn't make fun of me instead. I cried because as I remembered my own adolescent behavior, I felt shame for judging these kids -- and without ever having seen them! I made assumptions about them based on what they said and where they were and I hated them for doing something that 25 years ago I was probably doing too.

So I told everyone I knew about what happened. I shared on Facebook. I texted friends. I told coworkers. I wanted to expose this dark thing to the light, to diminish its power in whatever way I could. Turns out everyone I know has a story. Most people I know are or feel marginalized in some way, and many in multiple ways. The world has become a much more tolerant place than it was even very recently but we have a lot of work to do before I am convinced that we are really there. This may have been the first time Teeny was called this awful name but it won't be the last. As her mom, I want to give her all the tools she will need to teach the haters a thing or two. But the truth is that I don't have them. I am still a crybaby. Words still really hurt.

I know she is loved. I know she is growing up in a family that embraces difference and diversity. I know she will have good days and bad days and that every day she will come home to parents and a sister who will listen and be there for her consistently and lovingly. But in the face of cruelty, we will have to trust her to find her own way. I wish I could package this up as a teachable moment, but it's too painful. Instead, it just has to suck. I hate that I look over my shoulder every time I pass the playground on our street, wondering if the teenagers hanging out by the baby swings are the ones that accosted my family.

We've had some really wonderful days since then. Teeny had and loved her first hippotherapy session. We went to the ballet at Lincoln Center and saw Cinderella. We played in the park in beautiful sunny weather. The girls got cookies and smoothies at Peacefood. We bought them new sneakers for spring and when they got haircuts they left with pink balloons. And yet it lingers. Its ugliness, pervasive. If I had a nickel for every time I heard as a kid that sticks and stones can break my bones but names will never hurt me, I'd be a millionaire. I didn't believe it then and I sure as hell don't believe it now. It's in the back of my mind. Etched onto the insides of my eyelids. I can hear the word in my ears when there is quiet. It makes me look at my daughter differently. It makes me whisper the question to myself: Well, is she? 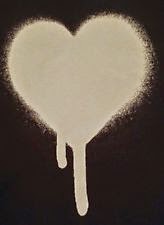